'Maybe aliens are using me to put out a record'

As the Kids in America singer begins her first UK tour in 30 years, she talks parenting, plastic surgery – and her belief in extraterrestrial intervention

The first man I fell in love with carried a photo of Kim Wilde in his wallet when I met him. For a while, she was my jokey love rival, but I think I was probably a bit in love with her, too. In the 80s, it felt as if everyone was.

Kids in America, her 1981 debut single, was a global hit and Wilde went on to sell more records that decade than any other female British pop star. Hits included Chequered Love, You Keep Me Hanging On and You Came; she won a Brit award; she toured with Michael Jackson.

And then she seemed to vanish. She resurfaced briefly around 2000, presenting TV shows about gardening for the BBC. Another dozen years later, she became an accidental YouTube star when someone posted footage of Wilde and her brother treating a commuter train carriage to a drunken impromptu concert. The pair were on their way home to Hertfordshire from a Christmas party in London and, in the festive spirit, belted out a few numbers to startled passengers. The charming video went viral and led to the release of an album of classic Christmas covers in 2013.

Now, Wilde has released an album of new material, Here Come the Aliens, and last weekend she embarked on her first full solo UK tour in 30 years.

We meet 10 days earlier, when the final details of stage outfits (black catsuit and cape) are being perfected, footwear has just been purchased (she holds up a pair of glittery, chunky lace-up ankle boots to be admired) and Wilde is waiting to hear if her album will make the UK charts. (It does, two days later, entering at No 21).

I hear her before I see her. The sound carrying across the lobby of a London hotel is the same unmistakably husky, sugared voice that sang Kids in America. At 57, her face is still instantly recognisable. She is wearing a black leather jacket and crimson lipstick, her blond hair scrunched up in a messy knot. She could not look like a happier pop star.

Her new album is a collaboration with her brother Rick and features her niece Scarlett. Music has always been a family affair for the daughter of 50s rocker Marty Wilde and Joyce Baker of the girl band the Vernons Girls, who together took care of her career. “That gave me a ridiculous amount of emotional freedom, which I really needed, because when I started out I needed to know things were being taken care of,” she says. There was a downside, however: “Before I knew it, I was 30 and I didn’t know how to really take care of myself.” She had never had to buy a household appliance, fill out a mortgage form, file a tax return. “The stuff that enables you to navigate through life on a practical level, I didn’t really know how to do that.”

Wilde is a funny mixture of earnest intimacy and irreverent nonchalance. “I knew someone was tapping on the window of my mind all the time, saying: You’ve really got to get a grip, Kim, because this is something you need to do in order to grow up properly, to become a grownup,” she says, sounding uncommonly self-aware. Then she adds: “Also, my career ground to a bit of a halt. And, anyway, I was really quite bored.”

Wilde moved to rural Hertfordshire, converted a barn and married the actor Hal Fowler in 1996. During her first pregnancy the following year, she enrolled in horticultural college. “I was so out of my comfort zone. I had to relearn who I was, learn how to be a parent, learn about gardening, do my homework, get my assignments in.” The couple had a second child and Wilde became a professional gardener.

She says she was only too happy to leave her pop fame behind. “One of the most liberating things I ever did – I was so ready for it – was to change my passport name [to her married name]. And then I changed my chequebook, and then I changed my driving licence, and I saw Fowler written on it and that made me feel great. I felt like maybe how one of those Russian diplomats feels when they get given a new identity. I’d had a career. It was exhausting, that career, and I was so relieved to be Mrs Fowler, under the radar completely and bringing up kids and taking them to school and cooking toad in the hole.”

But being a mum and a gardener, she soon discovered, was harder work than people think. “My life got exhausting again. The busiest time of my life was when I got married and got into gardening and had children and got into horticulture. Everyone has this dreamy, dewy idea of ‘Oh, she got married and had children and started planting seeds, she grew vegetables and they ate them in the kitchen’, you know, which is true. We did all of that. But I don’t know what people think about what it’s like having two children within two years. It’s the hardest struggle in the world. Yet everyone imagines that that’s a really relaxing thing.”

She can’t explain how she then “ended up making TV programmes about gardening”, but by 2001 she was presenting the BBC’s Garden Invaders. “It all just sort of happened. It all felt good, but it was absolutely exhausting having another career that I hadn’t planned on having. I certainly wasn’t looking for it. I’d had a career. I didn’t want another career. It just became one.” Before long she was writing gardening books and newspaper columns, too.

To complicate matters further, she never gave up making music or touring. She released singles in 2001 and 2002, which sold in mainland Europe – where she has been performing for the past 15 years – as did new albums in 2006, 2010 and 2011. She has toured the UK three times since 2003 with other nostalgia bands, as part of an 80s revival show. I ask what keeps motivating her when she has created another life in the country that clearly makes her very happy. She grins and shrugs. “This is my destiny.”

As Wilde talks, I begin to realise that, although her new album sounds contemporary, her register belongs to the particular sensibility of 80s pop stars, a world away from the nakedly calculating ambition of today’s generation. Wilde affects a casual carelessness about her career that makes me nostalgic for the time when performers could plausibly pass off success as something that just happened to them. The artlessness is possibly disingenuous, but hugely likable.

She sounds just as relaxed about almost every other aspect of her life. When her children were growing up, “I was good cop. Their dad’s been sort of bad cop.” Now 18, her daughter is a singer-songwriter; her son, 20, is “an incredible guitarist”. When I ask if their opinion of her music matters to her, she chuckles. “Not really, you know. It’s not an issue for me.” Wilde found being the daughter of a pop star difficult, “because he often wasn’t around and also because I was always ‘Marty Wilde’s daughter’ rather than being Kim, so that kind of took away a lot of my self-worth.” But when I ask how her kids feel about her fame, she says: “I really don’t know, if I’m honest with you. I think they’re probably more on the embarrassed side, but I actually don’t know how they feel about it. It’s an irrelevance to them, you know, as long as I help them and maybe get some of their washing done from time to time and give them a lift when they need one.”

The music industry has changed beyond all recognition since her first hit 37 years ago, but Wilde is sanguine about its future. “Somehow it will evolve and it will survive. It has to.” She isn’t troubled, either, by the hyper-sexualisation of female pop. “Well, not when I look at Adele, so, no, I don’t let it bother me too much.” Other older women in the industry may feel pressure to undergo cosmetic surgical procedures – Toyah Willcox wrote a book about having a facelift – “And each to their own is what I say. But it’s not for me. I’ve never really cared about what people think of me, not that much. Definitely not to the degree that I would let someone put a knife in my face.” What about her voice box – has she taken measures to protect it? She laughs. “I haven’t, no. I think I’ve inherited my dad’s vocal box. I’m just very, very lucky.”

Wilde doesn’t come across as blase, just strikingly content. The only subject that makes her intently animated is, of all things, extraterrestrial life. She considers herself psychic and is convinced that she saw a UFO above her back garden in 2009.

“I have had a lot of time to talk about it and think about it and I do think, obviously, that aliens have been here for ever. They’ve been watching us for ever. They’re in a situation where they know we have to evolve, in the way that we have to let our children grow up to a degree without our intervention. But we have to intervene sometimes, in case they kill themselves, so I think they’re reaching more of a point where they’re getting a bit, like: ‘We might actually have to do something here, guys. We might actually have to start raising the vibration in this planet for humans to understand that we’re real.’ Maybe they even are using me, to put out a pop record with them on it.”

She is not joking; her new album features aliens on the cover. “Maybe it’s just part of the plan. Maybe they’re just saying: ‘We’re going to have to get everyone used to the fact that we’re here.’ I mean, if they know so much, why wouldn’t they? They might think: actually, there’s that girl in Hertfordshire, the Kids in America girl. Yes, maybe we can get her, because she might get people to listen.”

Here Come the Aliens is out now. Kim Wilde is on tour in the UK now 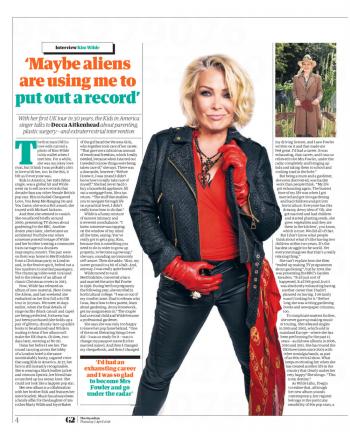