Date
May 29, 2018
Published in
Closer (UK)
Written by
Sofia Zagzoule

Legendary ’80s singer Kim Wilde tells Closer about her comeback – and hanging out with the King Of Pop!

She was the darling of S the pop world back in the ’80s, selling over 30million records, and even supported David Bowie and Michael Jackson at the height of her fame. Now, she’s back with new album Here Come The Aliens, her first collection of songs since 1995, and her first solo UK tour in 30 years.

But Kim, 57, admits she still looks back fondly on her time as a global sensation, especially going on tour with Michael, who tragically died in 2009.

She smiles, “He was very gentle and sweet. He always had a lot of people around him – it was a complete circus and he just seemed this lonely figure in the middle. I was the one hanging out with his band, having a drink after the gig, and he was nowhere to be seen. You could see the level of isolation and he paid the price with his life. I got to see up close what fame can take from a person.”

After turning her back on the industry in the ’90s, when she was dropped from her label, Kim decided to retire to the country, swapping partying for gardening, and chose to raise her children instead.

And the Kids In America singer – who’s forged a successful career in gardening, working on three horticultural shows for the BBC – says, “I lost some confidence, which is why it has taken so long to make music again. I got bored. I grew up in the public, and by my mid-thirties, I didn’t want to do it any more.”

She adds, “For many years I didn’t want to face the crowds and throw my hat in with Rita Ora or Dua Lipa with new music. I thought there must be more to life and there was.”

In 1996, Kim married Hal Fowler after they co-starred in the musical The Who’s Tommy. They went on to have two children, Harry Tristan, who is now 20, and Rose Elisabeth, 18.

Kim says, “I had a family and got into horticulture and that’s obviously still a huge part of my life. I loved having my kids, changing my passport to Kim Fowler and being a normal mum. But now I’ve been doing so many gigs because my kids are flying the nest.

“I didn’t think people would want to see a 57-year-old Hertfordshire housewife sing music – but they do!” 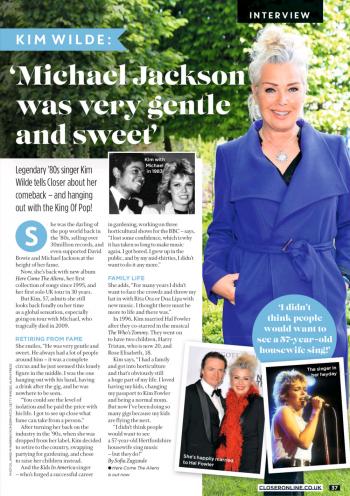