Out of this world

Kim Wilde's new album Here Come The Aliens is in part a tribute to the pop music she grew up with. Duncan Seaman reports.

Gearing up for her first UK album release in more than 20 years, Kim Wilde seems thoroughly in her element. She is, she says, "really looking forward" to the UK headline tour that will accompany Here Come The Aliens and delighted that radio stations have taken to its fizzy lead single, 'Pop Don't Stop'.

"I'm really excited and can't believe it's happening. It's like living in a parallel world", she says. The album is bookended by two space-themed songs. The first, 1969, refers both to the Apollo 11 moon landing that year and the quizzical media response when she mentioned that she had spotted a UFO near her home in Hertfordshire nine years ago.

Wilde wrote the song with her brother Ricky around 2014. "I kind of linked it from being full of wonder at eight years old seeing man land on the moon which seemed like an unbelievable event and then skipping into 2009 and having another unbelievable event unfold in the sky above my back garden", she says. "I know it sounds a bit ridiculous but actually it made a huge impact on me and the people who saw it with me, and also on the local community. It made the local newspaper and a lot of people round here also saw something extraordinary in the sky that night. So yeah, I'm a firm believer that they're here, that they're visiting, they're around, they're not sure whether to give us some more time here to mess things up or maybe they'll come and take matters into their own hands."

The album closes with a ballad to Rosetta, the space probe which brought us new understanding of comets. It seems both Wilde siblings are deeply fascinated by the whole idea of space. "My brother's just as crazy about the subject as I am", says the singer, 57. "We're kind of borderline obsessed with the whole thing."

Here Come The Aliens was largely made at RAK Studios in Regent's Park, where Wilde recorded her first single, Kids in America, with Mickie Most back in 1980. "It's a place where my career began", she says. "It's the building I walked into when I first met Mickie Most who spotted me and wanted to make me into an international pop star, so that building holds a lot of special memories for me. Of course we recorded all our early hits there."

Wilde admits to being a little unnerved finding herself back in the vocal booth at RAK. "I found the emotions of being there (at RAK) a little bit overwhelming from time to time. We recorded most of the tracks with my band there but we ended up doing a lot of the vocals in the Doghouse Studio, which is Ricky's studio, in a more intimate setting. But nonetheless I was there when the tracks were going down. It's one of the best studios in the UK - or in the world - and we got an amazing sound."

Pop Don't Stop, Wilde's first duet with her brother, is their "open letter to the whole genre of pop music". "We grew up in the Sixties, the birth of pop music, really. Rock 'n' roll started in the late Fifties but pop music really made its mark in the Sixties as we were growing up and listening to it." Wilde's father, Marty, one of Britain's first rock 'n' roll stars, was "hungry" to hear the new generation of pop bands springing up in his wake. "When we were in the car we had the radio on; when we were at home the radio or the record player was on and Dad was constantly buying records or singing the songs that he was writing, so there was music everywhere. Then being teenagers in the Seventies, with glam rock and punk. So it's an open love letter to the music that shaped our lives and continues to shape our lives."

A new addition to Wilde's writing team is her niece, Scarlett, who also designed the album's striking pulp fiction-style artwork. "She's been my backing vocalist for about ten years now but she's only developed into an artist in the last handful of years. She's an amazing singer, she's an instinctive songwriter and she's a great performer so it's another great presence on the stage. It takes a little bit of work from me, which is always helpful."

In 1988 Kim Wilde supported Michael Jackson on the European leg of his phenomenally successful Bad Tour. It included a concert at Roundhay Park, Leeds. Wilde remembers the UK shows being "phenomenal". She says: "I was really overwhelmed by how amazing the audience reaction to me was when they were clearly standing there waiting for Michael Jackson."

Two years later she supported David Bowie. Being raised on Bowie's music, Wilde was thrilled. "The tour that I was on, Sound and Vision, was his greatest hits tour so I was in heaven", she says. 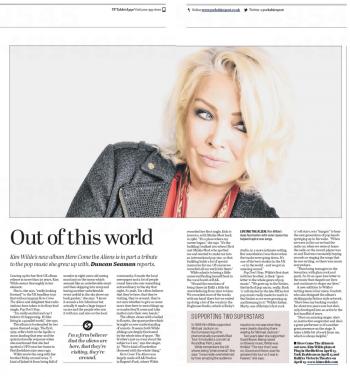