The big comeback of Kim Wilde

It's not a coincidence that her new cd is called 'Here come the aliens'. Kim Wilde, the blonde singer who had big hits in the Eighties with Cambodia and Kids in America, believes in extraterrestrial life. The 58 year old British woman, who starts a big tour this summer and is also coming to our country, tells about it in an exclusive interview with Privé. She is openhearted about love, the big depression that almost broke her and her decision to stop drinking.

She has gained a bit of weight and has aged as well, but Kim Wilde is still a sight to behold at 58. It is a victory for the woman who became an idol at 20 and lost her way after that. Not immediately, she first enjoyed it all. There were golden and platinum awards, concerts everywhere, photo shoots, lots of money and truckloads of so-called friends. In the early Nineties all this fame and fortune turned around and slapped her in the face.
Now, on the eve of an exciting new tour which announces her big comeback, she looks back on her career and her life with a smile on her ever beautiful lips.

"When you're young, you tend to take everything that happens for granted, even fame. I never wanted to have fame, I just wanted to be a singer. I wanted to make music. I enjoyed it all, of course, but you are being controlled. You go from concert to concert, from hit to hit. Nothing was too crazy."

The madness lasted for ten years, just before her thirtieth birthday she collapsed. She had done a tour with Michael Jackson and recorded a Christmas record, featuring duets with Nik Kershaw, Rick Astley and her father, the rock 'n' roll singer Marty Wilde.

Did you see it coming?
I would say so, in hindsight. When I was touring with Michael Jackson I should have been overjoyed. Everyone was making a fuss about me, I was part of the biggest tour in the world, but I didn't feel happy. I experienced what it was like to be a megastar like Michael and it made me feel sad in a way. Hiring an entire hotel floor, to hire a theme park to play there on your own... it felt isolated, unreal. The whole point of a theme park is to see other people there... it just wasn't my thing.

What happened when you really collapsed?
I felt increasingly worse, while I had everything. Sometimes I was angry with myself: I had a chance to make music, I was a pop star with hits and gold records, travelled around the world, slept in expensive hotels, I could do whatever I wanted... But I still woke up without any lust for life. There was no motivation to do anything. As if there was a gaping hole in my soul.

When you ended up in a depression, you started gardening. Was it therapeutic?
(Laughs) Yes, it was therapeutic. I stopped performing and started horticulture. It saved me. I had a talent for it and I loved working in the ground, to feel things and to plant things, not knowing what would come out. Just like those wonderful bulbs in the Netherlands. I love the Keukenhof.

Years ago, you suddenly saw a weird light in the sky, extraterrestrial life you said. Now your new cd is called 'Here Come The Aliens', was the light your inspiration?
Absolutely, on internet many people said they'd seen the strange light. I knew for sure that they were aliens and I am convinced they are among us. I think they have a good will towards us, or else they'd have wiped us off the face of the earth already by now.

The singer is not kooky. Is her happy marriage with Hal Fowler, eight years her junior, the reason?

Was his appearance the big turnaround in your life?
Sure. It was love at first sight between us, six months after we first met we married in 1996.

And then you didn't want the name Wilde anymore?
No, I felt great changing my name to Fowler. I grinned every time I saw that name on my bank account or other documents. It gave me the opportunity to reinvent myself. When we were together, I truly realised that my biggest dream were not those platinum records, but a happy family. I am an oldfashioned girl. Our children, Harry and Rose, are now 23 and 21, and more or less left home, but the years as a family were a feast and we still have a great time together.

So why the comeback to live performing?
Because music is my big passion after all. I always kept on singing, it was primarily the whole circus around it which bored me.

What is the big difference between now and thirty years ago?
I feel more at easy on the stage and I am more selfassured now. I have more fun when I perform now. Singing and performing makes me very happy. It is more important to me to share things with my audience, I love the contact... You know, there is already so much that divides people, music brings people together. I can't wait until I get my wonderful band back on the road again.

How do you stay so fit and youthful?
I train a lot, I do yoga and I stopped drinking, years ago. I loved wine and cocktails, but I feel so much better now that I have stopped drinking them.

In November you're coming to the Netherlands. Is it a happy return?
Yes, I really love the Netherlands and the Dutch audiences. I have wonderful memories of the Netherlands, I've been there a lot and I have friends there. When princess Beatrix was on the throne we celebrated Queen's Day, it was such fun! I think Dutchies are friendly and optimistic.

What will you do when you are in our country?
I will eat bitterballs, I love those! 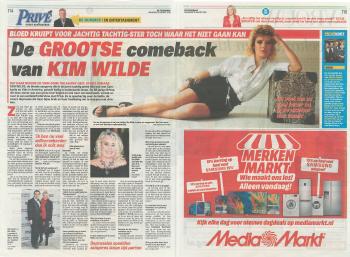