‘I’ve always had the capacity to enter into a song and experience it fully.’ It’s certainly one way to stage a comeback.
Back in 2012, Kim Wilde was a former 1980s pop star pursuing careers as a radio presenter and landscape gardener. But one night just before Christmas, she hurtled back into popular culture thanks to a drunken indiscretion. Coming back from a party on a London train, sporting a pair of sparkly reindeer antlers, she launched into a slurred rendition of her 1981 hit Kids in America, accompanied by brother Ricky on guitar. The performance was filmed by a passenger, and the six-minute clip went viral on YouTube.

Wilde was mortified. “I was watching the viewing counter going up, and my future disappearing into a black hole,” she says. In fact, it had the opposite effect, making the nation warm again to this spirited 1980s icon. The interest led to Wilde putting out an actual Christmas album, which featured a cover of Rockin’ Around the Christmas Tree with an accompanying video re-enacting Wilde’s train antics. “If two million people want to watch me drunk singing Christmas songs, maybe they’d be up for some sober versions,” she jokes.

This, in turn, has led to a full-blown comeback. Wilde’s new album, Here Come the Aliens, is her first record of original songs since 1996. It was preceded by the single Pop Don’t Stop. This month, she embarks on her first UK headline tour in more than 30 years.

“I was busy bringing up kids and being married,” she says. “I lost my ambition. But then the kids buggered off to uni. And I thought ‘Sod it, let’s get back in the ring. I’ve still got some fight left in me’.” What is clear is how much she is enjoying it. In a London hotel, she is holding court in full pop star mode: leather jacket, hair dyed blonde, vivid eyeliner and red lipstick. She describes Kim Wilde as “a super-persona: joyful, positive, passionate. It’s a fabulous part of myself, the best I can be”.

It is refreshing how much Wilde seems to relish being a pop star. “Pop has given my life so much meaning,” she says. “I grew up on the radio, I’ve always had the capacity to enter into a song and experience it fully, visually and emotionally.”

This is the subject of Pop Don’t Stop: “When you lose your way you come back twice as strong/Here you come, you’re No. 1” “Maybe that’s a bit hopeful,” Wilde jokes. “It can be a rollercoaster career, but I never stopped loving music.”

Wilde was a star at 20, spotted by producer Mickie Most when she visited RAK studios to sing backing vocals for her brother. Her father, Marty Wilde, was an early British rock star who wrote the lyrics for Kids in America. With her sulky, new wave looks and bright, dynamic pop, Wilde quickly became a pin-up star.

“I was up for it,” she says. “Worrying about what people thought about the way I looked was a small price to pay for being in the studio, writing songs, performing.” She briefly dated Adam Ant in that first rush of stardom. “I was enchanted by him,” she says. “I thought he was quite exceptionally brilliant. He took me to a very posh restaurant and spoiled me rotten.”

She had 17 UK Top 40 singles, sold 30 million records, scored a US No. 1 and toured with Michael Jackson and David Bowie. Wilde got a taste of how fickle pop can be as early as 1985. “I was doing some TV in Newcastle and all these journalists came towards me . . . and then they walked right past me. It was a real shock. They were all crowding round Jennifer Rush, who was the latest thing.”

She battled on but felt powerless to halt an inevitable decline. Turning 30 in 1990, she “hit a brick wall... I was exhausted”. She credits renewing a childhood interest in gardening with recovering her mental health. “Nature restored me,” she says. In 1996, having lost her record deal, Wilde appeared in a West End production of Tommy, where she fell in love with and married her co-star Hal Fowler. She retired from music to focus on raising a family and study horticulture, leading to a second career writing gardening books and presenting TV shows.

“It filled a void that music had completely consumed,” Wilde says.

In the mid-Noughties, Wilde was tempted back into performing as part of an 80s package tour. However, while she released some new music in Europe, she refrained from doing so in the UK. Her display of public drunkenness changed all that. Interestingly, she doesn’t drink any more. “The moment I hit the stage, as far as I’m concerned, I’m the most incredible thing that’s ever walked on the planet,” she says. “And afterwards, the make-up comes off and I am back to being plain Mrs Fowler. And I’m happy with that, too.” Here Come the Aliens is out now. 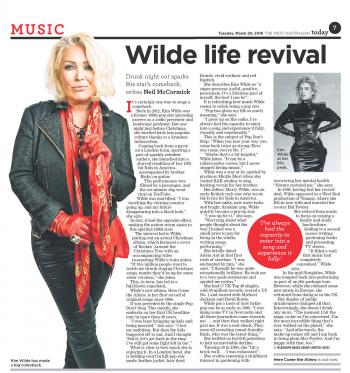