Singer Kim Wilde and her dad Marty share family stories of showbusiness and success - and reveal they'll never give up performing.

While most of us might have trouble finding something to celebrate this year, Kim, Marty and the rest of the Wilde clan have a few excuses to raise a glass. At the impressive age of 81, Marty is about to release his new album 'Running Together', featuring a duet with Kim. They are also the faces of this year's National Album Day, which honours the original album format. Kim says it's 'a dream' to release a record with her dad. 'I have always looked up to my dad. He doesn't know this, but when I was at school, I had a fantastic old black and white publicity photograph of him and I put it in my desk and I'd flip up the top and take a look. He was my first pop idol.'

Kim adds, 'I'd heard Ricky recording the song through my bedroom wall. That pulsating beat drove me insane. But when I head the finished song, there was no messing about, I threw myself into it. It was a gift. I had a door opened to me from an early age and I was able to walk straight in. To be a pop star at 20 was a privilege, so I knew I had to work really hard. I loved travelling around the world - all the performing, touring, interviews, TV shows. I remember going to Japan and sitting in a hotel room for days doing interviews, I was only let out to get lunch. But I loved it. Yeah, I did get a bit fed up sometimes but I'd soon have a word with myself - and if I didn't, someone did.'

Coming from a family which had experienced the fame game, Kim says her parents were always refreshingly down to earth. Marty, who was awarded an MBE by the Queen in 2017, says, 'The mother-daughter link is very strong between Joyce and Kim. Joyce would warn Kim of the pitfalls of fame. The main one was, 'Don't play footsie with the press'. Don't waffle, only say things that are true. And the other we used to say was, 'Don't act big time'. Singing is a job, like any other. It was different for big artists like Elvis Presley and Michael Jackson. Those people were in a terrible goldfish bowl. It's very difficult to know who your friends really are then.'

Evidently, it was quite the opposite for Kim. Despite the gold discs hanging on the walls at their family home, Kim and her siblings went to the local village school and had a humble upbringing. Kim recalls there being more playdates with their mates than rock 'n' roll parties in their house. 'I'm still friends with some of my school pals', Kim says. 'And then I've got my 80s pop mates like Carol Decker, we message from time to time. And Nik Kershaw, Clare Grogan and Rick Astley. We chatted a lot during lockdown, talking about how crazy we were all going not working.'

While lockdown put a stop to KIm - and Marty - performing their favourite songs, it didn't stop them listening to them. 'My dad has a pile of vinyl here at home', she says. 'We just sit and listen together - it's lovely. I remember being 12, sat in the lounge with vinyl out and sleeves everywhere, no one fussed about which sleeve it went back in. I'd listen to albums like 'Dusty In Memphis' by Dusty Springfield. That was when I knew I wanted to be a singer. Cilla Black had such a strident voice - so passionate. I'd play other real masters of song like Aretha Franklin, Stevie Wonder, Paul Simon and Joni Mitchell. Dad was never precious about his collection, or his equipment. We could just explore from Tchaikovsky through to Kraftwerk, it was amazing really.'

Enjoying the nostalgia, Marty reveals the album close to his heart is 'Elvis Presley', by the rock 'n' roll legend himself. "I bought it for 17 and six and it changed my life completely. Skiffle was out for me. I then got into other genres like Sinatra's 'Swinging Lovers' and Paul Simon's 'Bridge Over Troubled Water' album. But the other one which hit me like a ton of bricks was 'Sgt. Pepper's'. That was just iconic.'

As we discuss Marty's current release, it transpires that it has a special significance as it ties in with Kim's forthcoming 60th birthday and Marty's 60th year of marriage to his wife Joyce. (They wed in December 1959).

'Yeah, I'll be 60 in November', says Kim. 'Ageing doesn't bother me. I'm not fearful of those big milestones. I'm actually looking forward to it. Every day feels like a birthday to me. I feel grateful. Each morning I wake up and look at the sky. And if it's blue even better.'

And why should she be fearful? She is one of the few celebrities of her time who has maintained her natural good looks and she's still channelling the charisma. 'I did quite a bit of yoga with my sister over Zoom during lockdown', she reveals. 'It really helps me to stay strong. And of course, I had my garden. Being able to spend time in the garden was my saviour.'

In between being a 1980s pop phenomenon sharing the stage with Michael Jackson and George Michael, and touring the country with a comeback show in recent years, Kim stepped out of the limelight in her 40s to become a landscape gardener. And an award-winning one at that, picking up a gold medal at the Chelsea Flower Show in 2005. She was ahead of her time developing a side hustle presenting gardening shows on TV for Channel 4 and the BBC.

She says, 'When I got tired of the rollercoaster, I got off. I didn't stay on it longer than I wanted to'. After marrying actor Hal Fowler - who she met in the West End musical Tommy - in 1996, Kim fell pregnant the next year with her first child Harry, now 22 (she also has a 20-year-old daughter, Rose). It was at that point she studied horticulture at college. 'Hal really supported me transitioning from music to mum to housewife, then gardener... and back to music again! I've got my greatest hits tour next year which I'm really looking forward to.'

There is definitely life left in this rocker. Despite a health scare in lockdown, when an irregular heartbeat was detected (which corrected itself, sparing him surgery), Marty is fighting fit. His memory is razor sharp - he quotes lyrics, lists album names and recalls artist names, and he regularly plays with his mates and walks his Airedale terrier dogs. Kim says, 'Dad's got a lot to live for. He's also got a 50-date tour next year and a new album. He says it's his last but it won't be...'
And if Kim and her siblings have anything to do with it, it certainly won't. 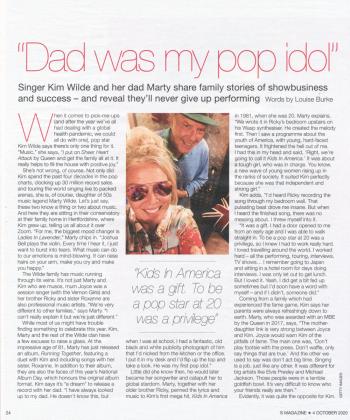 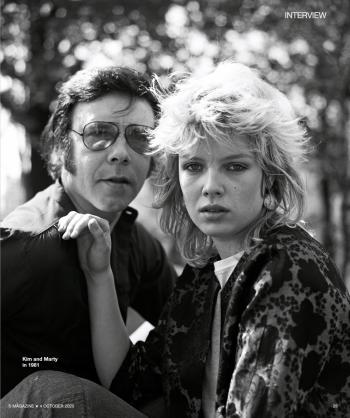 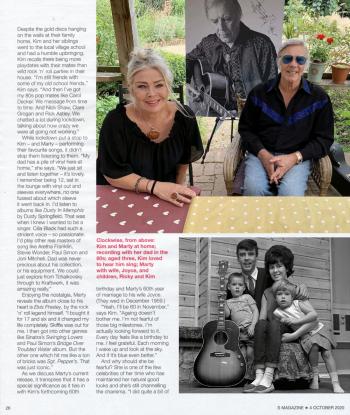 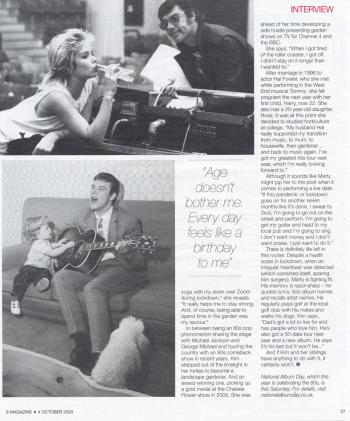 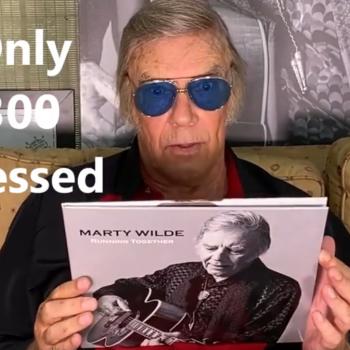