The Eighties were larger than life

The sounds of the 80s are back. Marion McMullen catches up with stars of the decade taking part in the Let's Rock retro festival.

Best thing about the 80s?
The best thing about the 1980s was the music and the clothes. There was a real feeling of experimentation. That’s why the 80s is larger than life, flamboyant and celebrated so much in 2020. I remember celebrating our first hit with my bandmates Mark White, Stephen Singleton and David Palmer playing the monitor mixes of Poison Arrow at the side of the road when our van broke down on the M1. The glamour of life on the road!

Met any musical heroes?
I’VE met most of my musical heroes and I’m really thankful for that – Smokey Robinson, David Bowie. I never met Sly Stone but I saw Prince in the lobby of the Sunset Marquis hotel once.

Best thing about the 1980s?
The best thing was that we were young, egotistic, rebellious and convinced we would take over the world. We celebrated by working non-stop – from Top Of The Pops straight to the airport, fly overnight to Berlin, do another TV show, fly overnight to Italy etc etc etc.

What was a career turning point?
I had an hour documentary about my life and work called Toyah Toyah Toyah screened on primetime ITV in late 1980 – that seemed to do the trick.

Best thing about the 1980s?
The brilliant pop stars! I still have a big Smash Hits collection with artists like Rick Astley, Pet Shop Boys, Altered Images, Toyah and Heaven 17 on the cover. Of course, these days I get to tour with many of these artists, but the thrill of working with them never fades. As I sit backstage putting on my make-up, hearing their 80s hits sparkle through the air, I’m transported back to an amazing decade!

Met any musical heroes?
Yes, many of them – Elton John, Elvis Costello, Kirsty MacColl and Roy Wood to name but a few.
Getting to know my 80s musical heroes has been very lovely. There is a great sense of camaraderie and I have also got to record with some of them, including Rick Astley, Nik Kershaw, and Heaven 17.

Best thing about the 1980s?
THE best thing about the 1980s was the fashion, the hair, the music, Dallas, Brandy Alexanders and the vive la difference attitude of all. We celebrated our first hit at our friend Kathleen McBride’s flat in London (who is a friend of my big sister Margaret).
We all watched our performance on Top Of The Pops, screaming and shouting.

Have you met your musical hero?
I got to interview Burt Bacharach which was a very special thing. I got to support Siouxsie and the Banshees on tour, but I’m glad I never got to meet David Bowie as I would have been a crumbling wreck.

Met any musical heroes?
Yes, I met Liam Gallagher back in my Liberty X days [Kevin, once of the ‘Just A Little’ chart toppers, replaced Marti Pellow as the band’s frontman in 2018]. We were doing a big concert in Belgium and the Appleton sisters were on the same bill. I didn’t want to go over and meet him as I thought he would just tell me to ‘F*** off!’. But in the end I did and he was lovely... and he signed my What’s The Story, Morning Glory album sleeve as I had it with me.

Best thing about the 1980s?
It was the last decade of true pop songs actually written by the artist who performed them.

Met any musical heroes?
Yes, Kraftwerk. I’ve never been so nervous in my life! 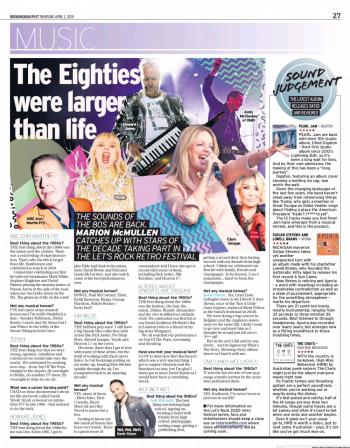