When Kim Wilde is not fussing about her award-winning garden in Hertfordshire, going for walks with her Airedale terriers or doing garden shows for the BBC, it still happens that she pulls on black leather and performs with 'Kids in America', 'Chequered Love', 'You Came ',' Four Letter Word 'and other of the tracks that made her one of the 80s most hit soloists in the UK. Kim Wilde was also extremely popular in Germany, Japan and Scandinavia, among other places. She captured the Americans in 1986 with a cover version of The Supremes '' You Keep Me Hangin 'On'.

Today, her fan base is not nearly as large, though she's still working with her rock'n'roller father, Marty Wilde, and her songwriting and producing brother, Ricky Wilde, to shape earrings and spice them up eagerly, simple keyboard garlands that send thoughts back in time. This can be heard on her latest studio album, the two-year-old ‘Here Come the Aliens’, for which she co-wrote the material with her father and brother, just as she did in the 80s.

Kim Wilde has sold around 10 million albums worldwide throughout his career. Some of the profits she has invested in her solid countryside estate. Since 1996, she has been married to actor Hal Fowler. They have two children. 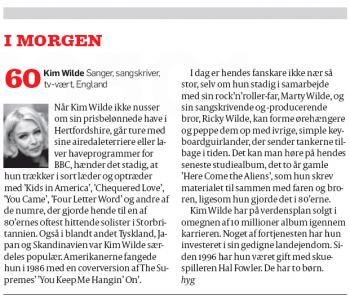