AS SHE celebrates 40 years in the music business, Kim Wilde is taking the milestone in her stride. Asked if she feels like a survivor, the singer who came to fame with Kids In America in 1981 is matter-of-fact. “Well, clearly I am. The numbers alone tell you that.”

Having sold more than 30 million records worldwide, including more chart hits in the 1980s than any other homegrown female artist, the daughter of legendary rock-androller Marty Wilde adds: “And my love of pop music hasn’t diminished. I look at my dad, who is still performing and still writing and recording. There’s me wondering when I might hang up my hat but my dad hasn’t so I wonder if I ever will.”

She reveals that, after becoming a wife and mother in the mid-90s, she considered doing just that. The hits had dried up. “And it was good to have a break from everything about being KimWilde,” she confesses. “It was a relief to walk away from a career that had dominated my life and I was a bit bored.Then when I got back into music again [in 2001] I realised how much I loved it and missed it.”

Kim turned 60 last November and is marking her 40th anniversary with a seven-disc box set called Pop Don’t Stop – featuring nearly 60 singles plus B-sides, remixes and videos. “It’s fantastic I can celebrate it with something this extensive,” she says happily. There’s also a two-disc version and, to keep things fresh, Kim has recorded a duet with Boy George called Shine On and a dance track with up-and-coming British singer Tom Aspaul called You’re My Karma.

“I’m so happy to be bringing out new music, especially during this time that has been so difficult and painful for so many people,” she says. “To come out of it with something so positive and upbeat feels like the right thing to do.”

Now scheduled for 2022, a greatest hits tour was meant to happen last year but then, of course, the pandemic struck. “That was really disappointing,” Wilde says down the phone from the Hertfordshire home she shares with her actor-writer husband Hal Fowler, 53. “But my survivor hat came on and I thought, ‘Right, I’m stuck at home so I’m going to make this time count’. I did a million things I’d put off doing in the house, sorted out all my memorabilia, all my vinyl, all the stuff that was piling up in my office. And I had a sense it wouldn’t last forever so I didn’t spend too much time crying about it. In my mind it was like, ‘The show will go on somehow, somewhere, some day’.”

She also enjoyed spending quality time with son Harry, 23, a musician, and daughter Rose, 21, who is studying to be a counsellor. “I felt very grateful for having a home that could shelter my family and for having a garden that has kept me sane,” she says.

Gardening, which she took up after the children came along, is her second love, but music has always been her first. Kim recalls hearing Cilla Black sing Anyone Who Had A Heart and thinking: “That’s what I want to do”. She enrolled on an art foundation course while doing some session singing too. Then her dad Marty and brother Ricky wrote Kids In America for her and, released in January 1981, it peaked at number two in the UK and was a worldwide smash.

Talking of her dad, who was a big star in the 1950s and 1960s, Kim admits: “He says now that he had worries about me going into such a volatile career, as any protective dad would, but he always encouraged my love of music and he was 100 per cent behind me.” Kim was 20 and still living at home when Kids In America hit big and follow-ups like Chequered Love, Water On Glass and View From A Bridge, all written by Marty and Ricky, proved she was no onehit wonder. “For the first two years I was leading a very normal life. My mum had just had another baby so it’s highly likely I’d come home from doing Top Of The Pops and change my sister Roxanne’s nappy,” she says. “I was happy to be working. I was fiercely independent as a teenager and hated taking money off my mum and dad, very much in the same way my own kids hate taking money off me now. I wanted to pay my own way and all of a sudden I could.”

She was hailed as a sassy, blonde sex symbol but that was something Kim never took seriously. “I had a bunch of girlfriends who were very down-to-earth. We were just knocking about in second-hand clothes shops, hanging out down the pub, never thinking of ourselves as a gaggle of sex symbols. Sometimes we looked great if we did ourselves up a bit but looking sexy wasn’t our focus.The career was all about the music and I didn’t really focus on my image,” she chuckles. “Sometimes I got it right and sometimes I got it really wrong. None of it was calculated. I think there are a lot of people sitting around these days planning campaigns and looks for pop singers, but there was a lovely spontaneity to it all.”

That first run of hits was followed by a few flops, a late-80s resurgence when her cover of You Keep Me Hanging On topped the US charts, then a break from music when she became a wife and mother. She returned to live performing when she joined the Here and Now nostalgia tour circuit in 2001 alongside the likes of Paul Young and Howard Jones. She continues to make new music but has embraced her chart heyday. “The Here And Now shows made me realise that there was still an amazing audience for 80s music,” she says. “The reaction on that first tour turned out to be the key to unlocking the next chapter of my career as a live performer and I haven’t looked back since. I was determined to have new material on the greatest hits album so it’s not all about the past, but there’s no getting away from the fact people love the 1980s. I kept thinking, ‘Surely there’ll come a point where it runs out of steam?’ But it never does.” Why does she think that is? “It was a very diverse decade. It had a bit of rock, a bit of punk, a bit of funk, a bit of disco, a bit of New Wave – it just had the lot.”

Asked to pick a favourite from her numerous hits, she chooses 1988’s You Came. “Ricky wrote it about the fact he’d just had his first child, then he handed me those lyrics and I went off and wrote the rest. I wanted to make it less about having a child and more about anyone who comes into your life and turns it around.” Kim experienced just that in early 1996 when she met Hal. They were both starring in the West End production of The Who’s rock opera Tommy, in which she played Mrs Walker and Hal played Cousin Kevin.

They got married that September. Two years later Harry came along, followed by Rose in 2000, prompting their mum to study horticulture and create a garden for them to play in. That, in turn, led to a second career as a designer and presenter on such shows as Better Gardens and Garden Invaders. It continues to be a passion. “During lockdown it was my therapy and it helped keep me from going a bit crazy sometimes,” she says.

She’ll be hanging up the gardening gloves for a while when she appears at the Let’s Rock and Goatfest festivals over the summer and overseas dates later in the year, followed by her UK tour next year. She’s already match-fit, noting that walking the dogs Raine and Beau (both Airedale terriers) twice a day keeps her in shape. “And I’m a really healthy eater. I don’t overeat and I don’t drink.” Kim smiles. “I’m a pretty fit girl.” 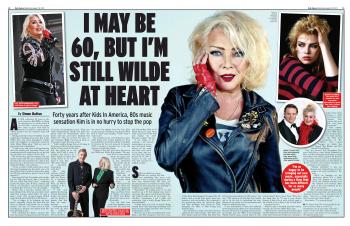