Marcel Rijs from Voorburg has written an English-language biography about Kim Wilde. After he bought her first single as a 10-year-old, he became fascinated by the British singer. The two have met several times since then.

Marcel Rijs is proud about the end result: a 360 page book with the story of the life of one of the biggest pop artists of the four past decades. The e-book was released earlier, but from 3 June the physical book can be ordered with the British publisher thisdayinmusicbooks.com for 24,99 British pounds (28.95 euro). The first thousand copies will be accompanied by a single-cd with two songs by Kim Wilde. And a signature from the author.

In May last year Marcel wrote the singer about his plan to write a book. 'I'm not so narcissistic that I want a biography', she was supposed to have said in the past. Still she wanted to read the text. She added quotes and wrote the foreword. "I've also done short interviews with people who have worked with her such as the former vocalist of Kajagoogoo", says Rijs. "I'm proud of the picture on the cover of the book. It's from Anton Corbijn."

In daily life Marcel Rijs works at the Koninklijke Bibliotheek. A sober and serious man of middle age whom you wouldn't directly associate with the adoration of a popstar. He's also a big fan of Kate Bush and the deceased singer Black (best known for his song Wonderful Life). But there is only one singer he knows and collects all about: Kim Wilde.

There's never been a book about the artist who conquered the world with the song Kids in America. Lots of international successes followed such as Chequered Love, Cambodia, View From A Bridge and a duet with the German singer Nena: Anyplace, Anywhere, Anytime. Kim Wilde performed on Parkpop twice. Marcel Rijs has met her several times and since 1996 he manages the official fansite of the British idol. His book got the title Kim Wilde - Pop Don't Stop: A Biography.

"The idea started when I bought a biography of the Norwegian band A-ha", he says. "The way the write had done his book, appealed to me. He told the story of A-ha from album to album, devoting one chapter to one album each."
Something similar, but then with Kim Wilde, was Marcel Rijs' idea. When he was at home a lot during lockdown, he had the time to do this. Just one e-mail to the British publisher was enough to get the green light. He took on the challenge to write in English with pleasure.

Rijs starts the biography in 1939, the year that Kim's father Marty was born. He was one of the first rock 'n' roll stars of England and had a hit in the Netherlands with Abergavenny in 1968. The old Wilde, who's still active in the music industry, wrote and produced songs for others as well, such as Lulu and rockband Status Quo. He also produced and wrote hits for his daughter Kim during the first years of her career. Kim's brother Ricky Wilde is also active as a musician and producer.

"A real musical family", says Rijs. "But this is also why Kim Wilde has such quality. In the beginning people said that she had her family to thank for her success. Fourty years later you can say that she's one of only few artists who have endured at the top for such a long time. She is still performing before sold out halls. This year she would do a jubilee tour because she's in the business for forty years, but this is postponed to next year [due to corona]."

Marcel Rijs is from 1970 and was 10 years old when Kim Wilde debuted. "I had an older brother and sister who were watching Toppop", he says. "Pop music was fed to me from an early age. I was just four years old when I sang along to the Sparks, a glamrock band who was popular at the time. As a child I bought singles by Abba and Boney M for one guilder each, at Aron's Disco Market at the Mient in Den Haag. Every Thursday I would go and get the Top 40 from the shop. I knew the charts by heart."

Although posters of Kim Wilde were in many boys' rooms walls, Rijs was not just interested in the blonde looks of the British singer. "I liked her first single so I bought it", he says. "The second too, and so on, until I thought: 'Gosh, I have six records of that person in my collection, maybe there's more to her'. I still buy singles, I have some six thousand at home, among it one metre of Kim Wilde singles. I try to collect everything that was released: strange pressings, versions with different B-sides from all over the world, 3 inch cd's that were briefly popular, and so on."

He calls her a very friendly woman. Accessible too. After a  concert there's always time to chat. "She has even performed at my wedding in 2008 in cafe/restaurant Rootz, says Marcel. "I met my wife two years before. She said to me: 'Now that we're getting married, could you invite her?' I called her manager, told him we were going to get married and waited. We told the personnel in Rootz that I had a friend who could sing and if they had the technical setup to make this possible. That turned out to be Kim Wilde." 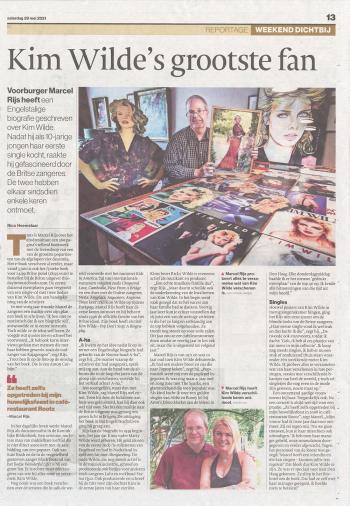