These all feature on Pop Don't Stop: Greatest Hits, a deluxe Best Of collection set for release in August which, over five CDs and two DVDs, collects every single and video that Kim made plus Top Of The Pops performances and a new interview.

Did you enjoy putting Pop Don't Stop: Greatest Hits package together?
I'm glad I got to do it during lockdown because I've been able to give the project my undivided attention. I now have a new appreciation of my career, especially having been so closely involved with Cherry Red who have handled the whole project with so much enthusiasm. I'm enjoying this nostalgia trip much more than I thought possible.

What can you tell Classic Pop about the two new duets included on it, the first, with Tom Aspaul called You're My Karma, was written by your brother Ricky Wilde and niece Scarlett Wilde.
Yes, they wrote the song during lockdown and it's a summery George Michael-inspired piece of uplifting dance pop.

How did Tom Aspaul get involved?
I asked Ricky if he could suggest a new singer to duet with on it and [music blogger] Lee Bennett pointed us to Tom's Black Country Disco, and we both fell in love with his voice. We made contact and were over the moon when Tom accepted our invitation to duet with me. Tom then invited me to feature on his album Black Country Discothèque on the track WM.

The other, which Classic Pop is very excited about, is a duet with Boy George called Shine On, a song written by you and Ricky with Kandy Krush co-writer Fredrik Thomander. How did that come about?
George had been in contact about a collaboration with me on one of his songs, Name and Number, so via Zoom we came up with a plan: I'd sing on one of George's songs, he'd sing on one of mine. George fell in love with Shine On and gave a haunting and beautiful performance. It felt to me that our first encounter at Top Of The Pops in 1981 had come full circle. George and I were both approaching our 60th birthdays in an often desperate and unprecedented year, and together I believe we made something that was beautiful and life-affirming.

You mention your first encounter with George. He was in the TOTP audience when you were performing your fourth single Cambodia on the show wasn't he?
Yes. He was dancing in the audience. At that time he wasn't famous, but someone he knew gave him some tickets to go, and there he shone like a star in the darkness - I couldn't take my eyes off him. I remember thinking that he should be on the stage, and how completely fascinating and charismatic he was. Some things never change!

Was being on the show something you aspired to as a teenager?
I vividly remember as an eight year old in 1968 watching TOTP whilst at a boarding school in Dulwich. The housemistress would let me watch her black and white TV, but she covered my eyes if any 'unsuitable' men with long hair performed. As a teenager, TOTP was on every Thursday night at home, with all the family watching together. I was mesmerised by the likes of Bolan, Bowie, Ferry, Lynsey de Paul and Pan's People. Then at school, the next day, we all swapped notes about it. Everyone I knew watched it.

How was the first time for you?
It was Wednesday 25 February 1981 when I recorded my first TOTP show. Madness, Kelly Marie, Status Quo and Kiki Dee also appeared. I wore an old dinner jacket from Oxfam, a striped top bought at a jumble sale borrowed from my mate Julie, and a pair of my mum's blue jeans. Everyone commented how cool and moody I appeared to be but in actual fact I was just completely overwhelmed at being there. That 'cool' look you see is the look of fear!

Your singles were always accompanied with striking promo videos. Which are the ones that stand out for you?
Kids in America. It was filmed in St John's Wood just down the road from my record company in London, Mickie Most's RAK Records. I was amazed to see they had painted a giant mural of Phil Silvers and Elvis on the studio wall. I loved Sgt Bilko and The Phil Silvers Show, and Elvis was God in our household, and I just thought, 'ALL this for ME!' You've got to remember that I was still living at home; my mum had just had my sister Roxanne and I'd probably changed her nappy that morning before recording that iconic video. Then You Came was filmed during the 1988 Michael Jackson Bad Tour in Berlin, which we were support on. The Wall came down a year later and we played at the Reichstag loud and clear for the East to hear. The energy was electrifying.

What can we expect from the rescheduled Greatest Hits Tour happening this year?
I've had the setlist pinned up in my office since lockdown started. It's expansive, covers all my albums, some of it in segue so that we can fit more in. I'd love to tell you more, but want to keep it as a surprise.

Finally, is there a new LP in the works? Have you written any new songs?
Pop Don't Stop, watch this space. 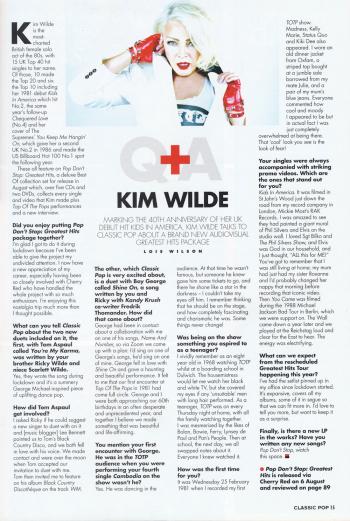