Voorburg fan writes Kim Wilde biography: 'She even played at my wedding'

VOORBURG - It started for Marcel Rijs in the nineties with a hobby site. It led to world star Kim Wilde playing at his wedding in 2008. Now the man from Voorburg has also written the first biography about the British singer. "People will be surprised how beautiful this woman still is."

Like any teenager, Rijs listened to the radio in his youth. He also got to know the music of Kim Wilde. 'I was ten when her debut single Kids in America was released', he says in West Awakes on Radio West. “I started following her and she just kept putting out great songs. That way I became a fan at a young age."

The love for the music of the British artist continues to occupy Rijs. 'The special thing about her music is that it is so melodic. It resonates a bit, which keeps it more special than other artists' music. And it's just beautiful."

Was shaking of course

At the end of the 1990s, Rijs wanted to do more with his passion. The Internet was still in its infancy and social media did not yet exist. 'I wanted to make a website, but I didn't really know what it was yet,' he says. 'Suddenly I thought: I'm doing Kim Wilde. I have her records and articles and that's how I started my own hobby site.'

The website did not go unnoticed in the United Kingdom, Rijs soon noticed. In [2001] she started performing again. Then I also went to England to see. It turned out that her management knew my site and that's why I was allowed to speak to her after performances. Of course I was shaking the first time, but if it happens more often you get used to it.'

The collaboration went so well that Rijs was asked to manage her two official websites. That he built up a really good relationship with the singer because of this, became clear when the Voorburger got married. "Not with Kim Wilde," he hastens to say. "But my wife-to-be said if I loved her music that much, I should get her to our wedding."

And Rijs succeeded. “I humbly called her manager to ask what it would take for Kim to play at my wedding. He said that in my case they could arrange something and three months later she was with us in the Grote Marktstraat at my wedding. That was a very special moment. Not only my wife was watching, all the guests were surprised too. It was the story of the evening though."

According to Rijs there is so much to tell about the musician that he came up with the idea to write a biography about Wilde. "Over the years I have collected a lot of information and stuff. I also work as a website manager at the Koninklijke Bibliotheek, which makes it easy for me to dive into newspaper archives and the like. So there was more than enough information for a book."

The author believes that the book entitled Pop Don't Stop has become a special work. 'Just the fact that a coherent story about Kim Wilde is told is special. Normally you only hear about her career in the 80s and that it went down in the 90s and that's why she started gardening. But the story is a bit more elaborate. I tell how she started her career with the support of her father and also discuss all the songs she has released."

This gives the reader a complete picture of the famous artist. Rijs is happy with the help he has received for his book. 'The cover photo was taken by Anton Corbijn. I am very proud of that. It also contains many photos by Dutch and Belgian photographers. Also from later years. People will be amazed how beautiful this woman still is." 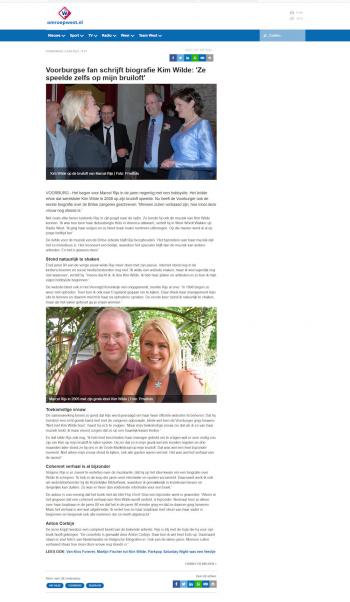