'I once saw a UFO in my garden'

"I went on tour with Michael Jackson and David Bowie, but I didn't enjoy it." So says Kim Wilde (61). In the 1980s, the singer scored world hits such as 'Kids in America', but she was devastated by fame. Only during the lockdown did it start to itch again. And look, on November 20, KIm will perform in Ostend. "I can only come to your country in the fall," she laughs. 'That's the only time I can leave my garden'.

Kim Wilde is an icon of the 1980s. No British singer sold more records and her posters hung on the wall in every boy's and girl's room. Still, Kim feels more confident today than she did back then.
"I was a sex symbol, but I never really saw myself that way," the artist already wrote about it. 'So I found it very difficult to live up to that image. Now that I'm almost 62, nobody expects me to play the sexy blonde anymore.'

"I'm very down to earth both in real life and on stage," Kim told the Scottish newspaper the Sunday Post. 'My dogs and gardening keep me grounded. Don't get me wrong: I love being Kim Wilde on stage and putting on those leather outfits, but most of all I'm really just a woman who likes to sing songs. You shouldn't make more of it than that.'

Just a side issue

It is also that urge for simplicity that led Kim to say goodbye to the music world at one point. "In the beginning of my career it was mostly about making videos, doing photo shoots and doing mandatory television appearances," she says. 'The live performance was really only a side issue, while that's what I preferred to do. But I was a celebrity and I had to act that way. At least that's what the fans, management and record company expected. I hated that! So in the mid-nineties I had had enough.'

Kim was only thirty years old at the time. "I went on tour with Michael Jackson and David Bowie, but I didn't enjoy it," he said. “I grew tired of myself and convinced that the world was tired of me too. So I decided to leave the party. But not to say goodbye to showbiz completely. I started playing in musicals and that way I could still sing.'

And another nice consequence of her decision: Kim met her husband, actor Hal Fowler (54), at the musical 'Tommy' by The Who. "We got married in 1996, two years later we had our son Harry and four years later daughter Rose," says Kim. 'When the children were here, I started to throw myself back into gardening. I studied horticulture at university. For Channel 4 I made the TV series 'Better Gardens' and for the BBC 'Garden Invaders'. I also wrote a few books on gardening.'
Still, the music was never far away. 'I've actually always kept writing songs, with the result that I have a lot of material lying around. Songs that ended up on my record 'Here Come The Aliens' in 20919 and on an album that I will release next year.'

During the corona lockdown, Kim released the five-double CD 'Pop Don't Stop', together with a biography. 'From there the idea arose to do the 'Greatest Hits' tour,' says the singer. 'If you add it all up, I've been in the music world for over forty years. That's not nothing, huh. During the lockdowns I really started to realize what I meant to the business and music history. And yes, I'm actually very proud of that. Only now have I learned to appreciate things. For me, corona was a positive experience.'
Kim Wilde was barely 19 years old when she had a world hit with 'Kids in America'. 'Looking back, that was too young, but it helped that I had grown up in a musical family,' she says. 'My father (Marty Wilde, ed.) was also very successful as a singer himself, so I had the best teacher I could wish for. He kept my feet on the ground, otherwise I might have floated. He taught me to love the music, not the fame or the luxurious way of life.'

And the blood is thicker than water, because Kim's children Harry (24) and Rose (22) are also active in music. "Obviously I'm proud of them. Harry is in the band Wunderhorse. They will soon be touring America. Rose writes very beautiful songs and works solo, but for now her focus is mainly on her studies. She studies psychology. But music is just in the blood. Feel free to call it a calling.'
Even Kim's father Marty Wilde is still performing at 83. 'Admirable, but at that age I can no longer see myself on stage in my leather pants. For the next decade I want to perform and enjoy myself on stage, but by the age of seventy I think I'll stop. I want to keep it classy.'

Finally, in addition to gardening and her dogs, Kim has another passion: space. She even had a close encounter, she reveals in Great British Life magazine. 'I saw a UFO in my garden once, yes. I was drinking a glass of wine, looked up and suddenly I saw a strange rig in the sky. It lingered there for minutes. It made a buzzing sound and suddenly it was gone. Many people observed 'something' that day. So no, I wasn't drunk. I know what I saw! Well, I don't really know, but it certainly wasn't an ordinary plane.'
So Kim believes in extraterrestrial life. 'Of course. Aliens have always been there. And they have certainly already been to Earth. Maybe I was chosen? Did they know who I was and did they think: 'Let that singer from 'Kids in America' sing about us too?' That's what I did. I've written songs about alien life. Well, anyone can think I'm crazy, but I really believe there's more.' 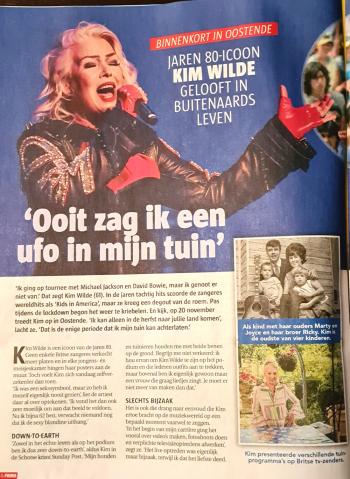 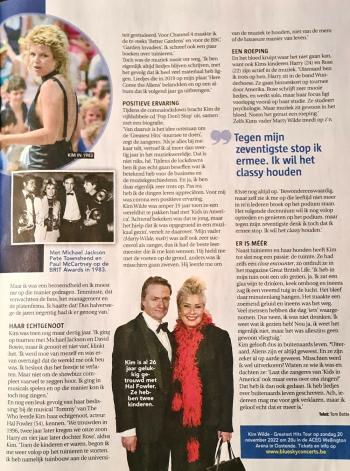