‘I’m getting more flamboyant with age!’

Pop star Kim Wilde opens up about the allure of the Eighties, falling for David Bowie and why gardening is her ‘therapy’...

Darling of the Eighties Kim Wilde is as popular today as she was when fans across the world were singing along to hits like Kids in America, You Keep Me Hangin’ On and You Came. But these days, she balances rock ’n’ roll with a spot of gardening, and life in the countryside, with her writer husband Hal Fowler, and two grown-up kids. But Kim is full of buzz as she talks to us about her upcoming Greatest Hits tour – showcasing hit singles from 1981 to 2020, and looks back at some of her craziest memories – and biggest influences…

What can we expect from your tour in September?
Well, it was delayed due to Covid, so it’s changed a few times. Even the wardrobe’s been updated. I’m having some real fun with costumes – I haven’t really done that in my career, I’ve always been a jeans and T-shirt girl. I’m certainly getting more flamboyant with age! Hats, capes, corsets – you name it! I’m really excited about this tour. I love travelling the country. I remember doing it with my dad [Marty Wilde], who’s also still touring! We’re born to wander, Dad and I…

Yours must be such a special relationship…
Oh, we listen to great tunes together and share a lot of similar experiences. Sometimes I give back the advice he gave to me over the years. He looks at me as if to say, ‘that’s a bit cheeky!’ And I say, ‘well, you said it to me years ago and it was right then and it’s still right now!’

Can you share one of these pearls of wisdom?
A lot of artists fall into a trap of, when they’re singing a song that they’ve sung many times, trying to change it up because they’re bored of it. But whoever went out and bought that record liked it just the way it was. So he’d often say, ‘Sing the melody the same, don’t make up a new one!’

Are you doing any Summer festivals?
I did the Mighty Hoopla recently in Brixton – I’d never done it before and it gave me such beautiful vibes. I’ve got the Culture Club in July with Boy George that I’m really looking forward to – we recorded a song in lockdown that ended up in my greatest hits record. I wanted him to be on it, he’s such an icon! I’ve got Rewind in August, too.

This tour celebrates over 40 years in music – wow…
I know! I’ve got a great band behind me and we’re throwing a lot at it to make it as joyful as we can… That 20-year-old that sang Kids in America feels like a lifetime ago, hanging out with Hot Chocolate and Suzi Quatro – the days of Top of the Pops, before mobile phones and the internet. I feel like I’m living in a parallel world now.

What are some of your standout career moments?
Going on tour with Michael Jackson in 1988 was pretty epic. An American superstar just doing his thing – a massive privilege. Then working with David Bowie a few years later. It was just wonderful seeing him having his make-up done. It was the last night of the tour, so I took a Marty Wilde T-shirt in for him and he loved it! I fell passionately in love with Bowie – but he was in love with his wife to be at the time, Iman – I didn’t get a look in. I loved him from afar. As soon as I saw him, I thought ‘My god, you are the most incredible person’. How could you not love David Bowie?!

What are the best showbiz parties you attended?
I got invited to an Elton John party back in the day. Pretty much anyone you can think of turned up. Another funny night was on tour with Steve Strange. We had a party in a hotel room one night, someone had a cheeky fag in the bathroom and set the fire alarm off while we all trolleyed outside having had lots of wine and pizza. Everyone else was looking at us as if to say, ‘This was your fault, wasn’t it?!’

You later diversified and discovered gardening…
Yes, that came into my life in a rather powerful way. Once we had the children, I wanted to make them a garden and once I wasn’t really a popstar anymore, I had time to go to horticulture college and learn more about plants, which fascinated me – the rest is history. I ended up going to the Chelsea Flower Show with it, writing books – now it’s a huge part of my life. To me, it’s therapy. A career in music can be a rollercoaster – it took me years to find a balance between those up and downs.

Do you still live in a renovated 16th-century barn in Hertfordshire?
I still live in that barn that we did up, with my husband Hal and our kids Harry, 24, and Rose, 22! Both kids are still at home, my daughter’s studying psychology at uni, my son’s in a band. I love having them around… raiding the fridge, leaving me with no eggs and then buggering off! My kids just like me being a mum. They love that I get the stuff out of the tumble dryer – they aren’t bothered about the rock star stuff.

You’re 62, but what age do you feel inside?
I still feel like I’m in my 40s but my body tells me otherwise! But my spirit’s the same. I’ve never encountered any serious ageism. The music industry is one place, for me, where age is irrelevant – look at Stevie Nicks, or Madonna!

Celeb crush?
Don't laugh... Harry Styles! If he walked into my house, I think I'd blush. 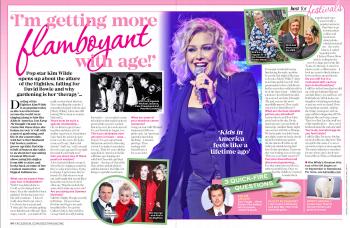