‘Music was like religion, but instead, our God was Elvis Presley, of course’

Kim Wilde has a greatest hits tour just as 80s-inspired pop is back in the charts. It was a great decade for music, the singer tells Alex Green.

The 1980s are having a resurgence. From the disco-inspired world domination of Dua Lipa to the galloping rock drums of The Weeknd’s Blinding Lights and beyond.

Is it just the cyclical nature of things? As someone who was there at the start, Kim Wilde is well placed to answer the question.

“The 80s were an incredibly diverse time but it wasn’t just all shoulder pads and sharp haircuts,” she says. “It was a really exuberant chaos of style. You would have ska, new wave, synth-pop or a bit of prog – some Genesis and good old rock and roll like Queen and U2. It was incredibly eclectic. The advent of synthesisers – the Fairlights, the Synclaviers, the Junos and all of those incredible new sounds. They were inspiring a whole bunch of new writers and producers, and one of those happened to be, thank God, my brother Ricky Wilde.”

We talk as Wilde prepares to go on tour in September after her dates were postponed due to Covid. She has spent the last two years prepping a greatest hits collection and indulging her love of gardening (she has won awards and written gardening books).

“I was so lucky to have a gorgeous garden – or a garden that became gorgeous rather, through my hours and hours of work every day. I just went into the garden."

Wilde is part of British musical royalty – her father, 83-year-old Marty, was among the first to embrace rock and roll and had a string of hits in the 50s and 60s with songs such as Teenager In Love. She released a score of decade-defining hits during the 80s, including Kids In America, and toured with the likes of David Bowie and Michael Jackson. Her 14th album, 2018’s Here Come The Aliens, was well-received by critics and peaked at number 21 in the charts, marking a late career resurgence.

Now, at 61, her bond with her family appears even stronger and she continues to write with her brother. Could she ever conceive of not working alongside him?

“We’re cut from the same cloth. We’re two peas in a pod. I’ve written lots of songs without him and recorded them, and there are many songs out there without his co-writing presence. In fact, I’ve just written a song today on my piano. But I just love working with him. We don’t really have to say very much in the studio, we’re so totally in tune. His passion for music is so intense.”

Growing up in the Wilde household must have been a unique experience, I suggest. “I had lots of friends whose family environments were nothing like that, or whose parents were much older,” she reflects. “Their dads were going to bed when my dad was jumping in a car and going off to do a gig. I was very aware that we lived in a unique way compared to my mates and their families. But I was overjoyed by it because I love pop music and I have since I was a child.”

Wilde was born in November 1960 and recalls the following decade as “an astonishing explosion of fantastic melodies and great sounds” – all experienced through her father’s record player or during long journeys up to Liverpool to see the grandparents.

“My dad appropriated it in the way that people appropriate religion – and that’s what it became,” she laughs. “But instead, our God was Elvis Presley, of course.”

Wilde’s musical education took in the Beach Boys, Simon & Garfunkel, The Beatles’ White Album and Joni Mitchell as well as Tchaikovsky and other classical greats. When she shot to fame in 1981 with the release of Kids In America, Wilde became an instant household name, her blow-dried blonde mullet copied by young girls across the UK. The next year, when her follow-up hit Cambodia took off, she met fellow 80s legend Boy George. The Culture Club frontman became a close friend and they are now touring together.

She remembers singing Cambodia on Top Of The Pops and looking down to see Boy George dancing at the front of the audience.

“In typical Boy George style, he had managed to talk him and all his mates into the studio to be part of the audience. They were this beautiful crowd of people dancing in front of me and I remember he stood out, of course – this beautiful form in front of me. I vividly remember thinking, ‘That person needs to be on stage, I don’t know what I’m doing here, that’s the person that needs to be on this stage’.”

The pair stayed close friends and have performed together a number of times over the years, including during a tribute to New Romantic pioneer Steve Strange, frontman of the band Visage, following his death aged 55 in 2015.

During lockdown, they connected over Zoom and Wilde asked him to add vocals to a new song, Shine On, written with her brother. They recorded virtually but were eventually able to meet up and record a suitably flamboyant music video.

Wilde also remembers a close encounter with David Bowie while supporting the late music legend on his 1990 Sound + Vision Tour. “He was a very normal guy in an extraordinary situation,” she reflects. “He would say ‘hi’ and would pop in and would wish you luck with the show in a very down to earth way. But one of the sweet memories I have is when I left the tour, we had done quite a few shows together, and I decided to take him a Marty Wilde T-shirt, which I thought would be fun. I wanted to see if I could make him smile. I thought, ‘If I don’t do anything in this lifetime, if I bring a smile to David Bowie’s face I can die happy’.”

When she entered his dressing room he was shirtless and having his make-up done. “I said ‘Oh, I’ve got a present for you’ and he picked it up and went, ‘Dad!’. It was so funny, so sweet. He was an absolutely charming, wonderful man, and a huge influence on me and my brother and all our family.”

As our conversation ends, Wilde reflects on the cyclical nature of things. “Bowie would have been a young, very young man, watching my dad and Cliff Richard and Billy Fury – all the pioneers of pop as it eventually turned out.”

Kim Wilde’s Greatest Hits Tour is at the 02 Glasgow on 13 September. See kimwilde.com for more details 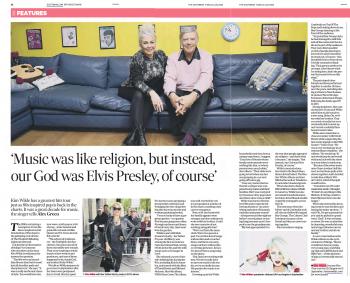