This week's Throwback pic is a summery one, because we're in the middle of summer and a scene like this reminds you of the good times had when you're outdoors and having fun. And fun they had.

This picture was taken in London for the French magazine Salut!. It appeared in an article entitled Kim Wilde: a sun cure and apparently featured a group of U.S. marines. The event was retold in a later article: Kim Wilde taken in traps, in which Kim said: 'I met them the other day. They played on the small bridge over the canal, along the park. So I called the other side: "Hey guys you have received the magazines with the family picture?" They got one of these blushes over there. They gestured at me, meaning "Stop this crap, the boss is here, don't talk about that here".' 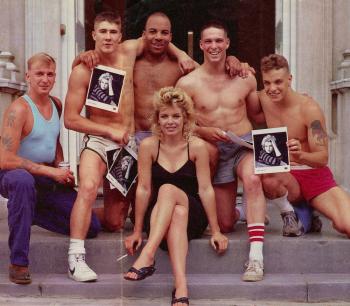