This week's Throwback Thursday is one from Wilde Life's own archive. Back in 2004, Kim Wilde did a one-off Here & Now live performance in the middle of Summer at the Bournemouth Fitness First stadium. Wilde Life's own photographer Katrien Vercaigne was there and captured the concert like only she can.

One of the pictures stood out, as it showed the electric atmosphere as well as the great interaction between Kim and her brother Rick. And that's appropriate, because Rick is celebrating his 54th birthday tomorrow. Wilde Life presents a gallery of photographs of Kim and Rick later today, but as a taster, here's that joyful photograph. 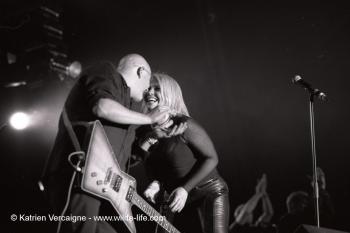