Looking back on Kim Wilde's career, it's easy to forget the countless television appearances she has done. Some of them have been especially exceptional, for instance when she was singing songs that were never released on her own albums. For instance, her appearance on the BBC programme Showstoppers, in which popular artists performed classic songs from films and musicals, originally broadcast 20 years ago today.

The song Kim performed was They can't take that away from me, written by George and Ira Gerschwin in 1937 for the movie 'Shall we dance' starring Fred Astaire. She did a very impressive live vocal performance, while also looking sensational in a dress with a transparent top. It's an image we like to present on today's Throwback Thursday. 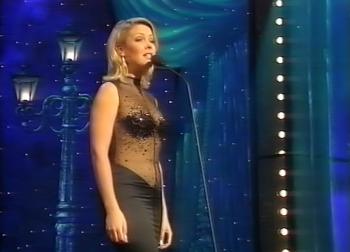