On December 10, 2006 - nine years ago today - Kim Wilde was the special guest of FFH Radio in Germany, performing an intimate Christmas concert in a small church in Kirchbrombach. It was one of a series of concerts to raise money for local charities. She was there together with Nick Beggs, Perry Ap Gwynneth and Ricky Wilde to perform eight acoustic songs, three of which were Christmas songs. Three of the songs were broadcast on FFH Radio on December 26, 2006.

All those who were there will know that this was a very intimate affair with beautiful music, not so much unlike the concerts at Knebworth House which are due to take place this coming weekend. This week's Throwback Thursday picture, therefore, seems well chosen. 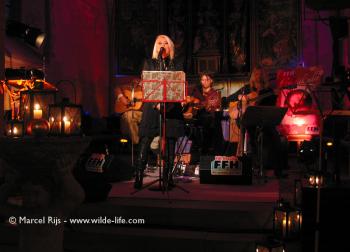