Although Kim had been performing live again for almost five years ever since she returned to the stage in the 2001 Here & Now tour, she was pretty nervous for the 'Stars for free' concert in Berlin (Germany) on September 2, 2006. This was the concert where she would present new songs from the album 'Never say never', which would be out two weeks later, for the first time. 'I fly', 'Together we belong', 'Forgive me' and 'Perfect girl' were played for the very first time to a very enthusiastic audience.

Earlier on the day, Kim did a signing session at the Bild kiosk in Berlin-Kreuzberg. Many fans were able to get an autograph on promo cards, t-shirts, records and merchandise during this hour long session. One of the fans made this photograph of the proceedings, which is our choice for this week's Throwback Thursday. 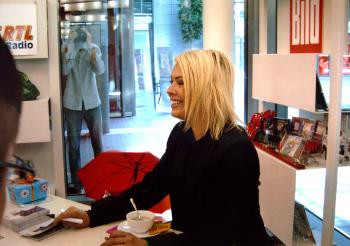