Kim Wilde has released many songs during her career. Some of them have been covered by other artists. On Cover Friday, Wilde Life presents cover versions of Kim Wilde songs. This week: L'uke.

If you were able to play one instrument, and it was the ukelele, would you be able to cover Kim Wilde with it? Well, sure you could...

L'uke is a German musician duo from Göttingen (Germany), consisiting of the singer Karin Reilly (vocals) and Daniel Adler (ukulele). They cover pop songs from the Eighties, using only a ukulele and voice. Their first and so far only album 'L'uke play Ukuleighties' was released in 2012. It features a cover of Kim Wilde's Kids in America.

Listen to their version here 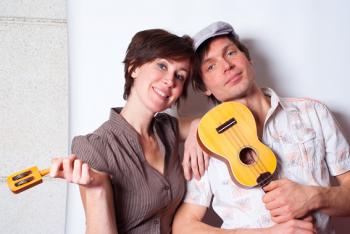