Kim Wilde has released many songs during her career. Some of them have been covered by other artists. On Cover Friday, Wilde Life presents cover versions of Kim Wilde songs. This week: Shaka Ponk.

Shaka Ponk (sometimes abbreviated as SHKPNK) is a French experimental rock band founded in 2004. Based in Paris, they mix different forms of popular music into their songs in addition to world music although predominately with an electronic rock sound. Lyrics are written mostly in a mixture of English, French and Spanish languages. They released their debut album 'Loco con da Frenchy talkin' in 2006, but they achieved their first chart success with the follow up album 'Bad porn movie trax' (2009). In 2011 the band added a female singer, Samaha Sam, and released their album 'The geeks and the jerkin' socks' in June 2011. Their biggest success was the 2014 album 'The white pixel ape', which peaked at number 2 in the French album chart.

Their cover version of 'Kids in America' comes from a television appearance in 2012. They had played the song live on previous occasions, but when they recorded a version for the French newspaper Le Figaro and then for the TV programme Taratata, they became a bit of an internet fad for a while. You can find the both live versions here. 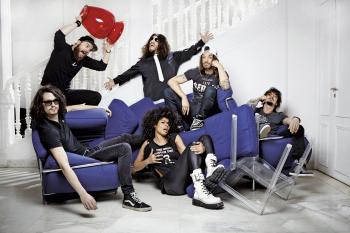