Today we remember Steve Byrd, who passed away on October 2. We thought it was a good idea to look back on their performances on TV together, between 1983 and 1994. Here are some of their best moments together.

When 'Love blonde' hit the charts, they appeared on stage together in the legendary chart show Top of the pops. Kim in her famous leather dress, Steve as the skilled guitarist right by her side. It's a joy to watch.

A guitarist by nature, it is funny to see him playing the keyboards for a change. Here he is doing just that, on the German TV programme WWF Club. Quite a rare performance because most of the promotion for 'Dancing in the dark' was done by Kim solo or just with Ricky.

You couldn't make a playlist like this without including 'Rage to love'. See Kim and Steve rock it out together during the guitar solo in this fabulous signature song.

Steve had actually co-written this song, and it must have been quite a treat to perform this song live at the Montreux rock festival back in 1988, one of the most prestigious rock festivals at the time. The televised version was overdubbed with the studio track, unfortunately.

Still one of the nicest outdoor performances for television, this piece recorded on Leicester Square with loads of people present. Ultravox legend Warren Cann appears on drums, Steve is the consommate professional playing his guitar almost routinely.

KIm and her band appear in this daytime show for a performance of 'It's here'. The focus is very much on Kim - and a certain landscape, for some reason - but Steve takes centre stage for a few moments as well.

Another German performance, this time in front of a large studio audience and on a rather large stage. Steve does what he does best, although he'd obviously prefer playing live instead of miming.

By his own admission, one of Steve's favourite performances. "This was such a great night with Kim."

It's all nice, this TV work, but when we remember Steve Byrd, all we really want to hear is the man live. And so, the last entry - and also quite possibly the last TV appearance of Kim and Steve together - is this live concert from Gross Gerau in 1994. 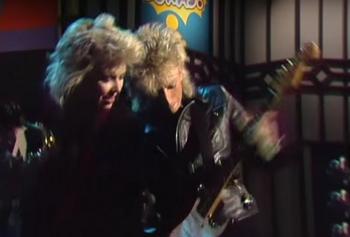