On today's Throwback Thursday picture we celebrate the birthday of Kim's daughter Rose. She was born on January 14, 2000, sister to her son Harry who was born two years before. Rose Elisabeth was born at 9.30am in a London hospital, weighing 7lb 15oz (or 3,5 kilogram). Husband Hal issued a statement on the day saying; "We are completely over the moon".

Rose was introduced to a curious fanbase a month later in an article in the UK magazine OK!, in which Kim showed off Rose and two-year-old Harry in her own home. In the interview Kim talked about giving birth for the second time: 'It was just as fantastic but it wasn't as dramatic. I had more idea of what was going on. I found both times great because I had Hal with me throughout. I didn't let him go further than about a foot away from my head throughout the whole thing.' 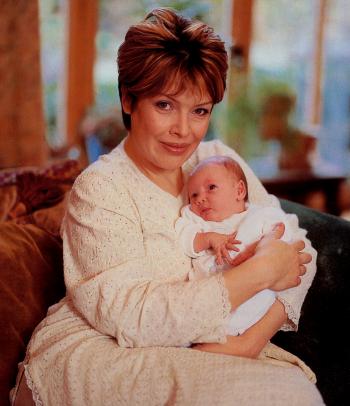