For this week's Throwback Thursday we go back to April 1, 1987. Before this date, Kim never appeared live on stage with her father - bar her backing vocalist duties during the Seventies. On the occasion of the 'Action for AIDS' concert at Wembley Stadium in London, however, she appeared with him on stage to sing 'Sorry seems to be the hardest word', with Ricky on keyboards. As Kim explained twenty years later: 'I wanted my dad to be there because I didn't feel it was just a problem that young people needed to address and it was very much a young person's pop concert. And I felt it was important to have someone, you know an elder statesman standing behind.'

Kim, who was promoting the concert in Good Morning Britain that very morning, admitted that 'tonight is going to be quite strenuous to sing because we're singing an Elton John song and Elton John's gonna be there'. Their version went down great and they ended up recording the track in 2007 for Marty's career-spanning greatest hits album 'Born to rock 'n' roll'. The concert was televised and released on VHS video in 1988 and on DVD in 2006. 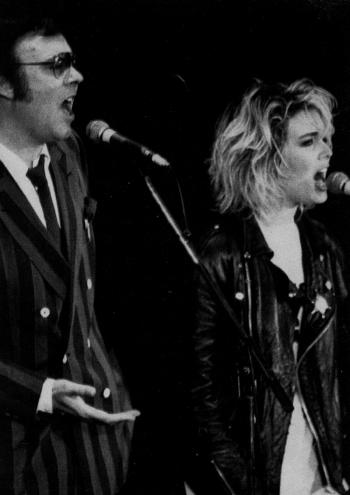