There were several different release dates for Kim Wilde's seventh studio album, 'Love moves', but it was released in Germany on May 4, 1990, at least, according to one article. Why was the album called 'Love moves'? According to Kim: 'because it's true: love makes you do even bigger things.' The big thing for Kim was to present herself in a more overtly sexy way. She was photographed by John Rutter for the cover of the album and the associated singles, and the result made many look twice. The photo below is taken from the inner sleeve of the album, and you can see why many were rather impressed with the new look Kim.

John Rutter went from successful to controversial in 2005, when he tried to extort Cameron Diaz with topless photos he made of her. He made the photos when Diaz was an aspiring model, then attempted to sell them back to her for $3.5m after she became a movie star. He was sentenced to serve three years and eight months in prison. 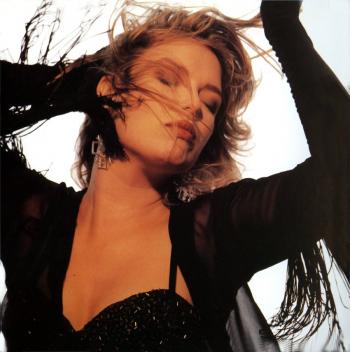