We don't need to travel back too far in time for this week's Throwback Thursday photo, because it's a still taken from Kim's music video for 'It's alright', which was premiered five years ago today. The video was directed by Nikolaj Georgiew and filmed at the Kameha hotel in Bonn (Germany).

The video featured Kim, Rick, Nick Beggs and Neil Jones plus a hired drummer, because Kim's own drummer (Jon Atkinson) wasn't available for the day. On the same day, the video for 'Sleeping Satellite' was filmed. That video premiered almost a week later, on August 3, 2011. 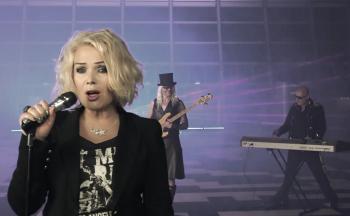