It's exactly twenty years ago today that Kim married Hal Fowler. The couple have now been married for exactly two decades.

The ceremony took place in the local church in Codicote with 150 guests and a big crowd of fans, photographers and villagers waiting outside to catch a glimpse of the beautiful couple. There was no shortage of press interest: the marriage was reported in various newspapers (local and national), magazines and television news broadcasts - not only in the UK but internationally as well. There was little time for a honeymoon: Kim had to continue working in 'Tommy', while also promoting her new single 'Shame'. But September 1 is still the day when they celebrate their wedding anniversary. So obviously, this week's Throwback Thursday photograph was taken on that blessed day. 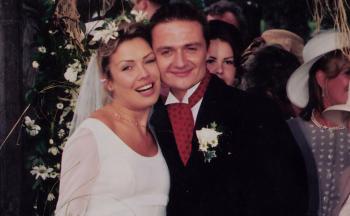