Avid Kim Wilde fans were a little surprised when Kim undertook a small tour of shopping malls in Germany back in 2012. The first edition of the 'Lange Nacht der 80er Jahre' ('Long night of the Eighties') took place in Erlangen Arcaden in Erlangen (Germany) on Saturday, October 6, 2012. Kim did a short set with her band, and the surrounding audience had a great time of course. This week's Throwback Thursday photograph was taken during this set.

A week later, also on Saturday, Kim did a similar set at the Riem Arcaden in Munich, and on the third and last Saturday Kim and band performed at the Regensburg Arcaden in Regensburg. These shopping mall performances were quite unique: Kim did appear in shopping malls some more times, for example in November 2012 when she switched on the Christmas lights at the Hatfield Galleria. However, usually she's more familiar appearing at big festivals and concert halls. 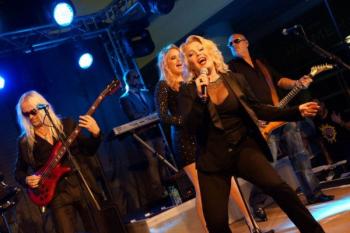