Kim Wilde will be touring Australia next month, together with Howard Jones. It's not so long ago that she was there the last time: on this day in 2013 she actually had her most recent live performance in Australia, in fact, at the Astor Theatre in Perth. We still have the setlist from that concert, as well as some photographs - and the photo below is one of them.

Kim said goodbye to Australia the next day, while her niece (and backing vocalist) Scarlett was staying over for a few weeks at the time. The situation is a little different now: Scarlett has been in Australia almost this entire year - but she will be joining Kim and her band during the Australian tour. It's something to look forward to, if you're over there right now! 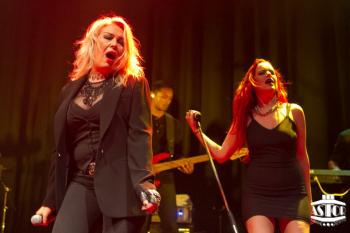