Today Peter Robinson celebrates his 54th birthday. Who? It's the singer better known as Marilyn. Born in Jamaica, he moved to the UK at four years old. As a boy, Robinson loved Marilyn Monroe's image, and Marilyn became his school nickname. While the name originated from homophobic bullies at school, Robinson decided to appropriate it to his advantage. As a teenager, he was a regular nightclub-goer and wanted to look different, so he adopted a Marilyn Monroe image wearing vintage dresses with bleached blond hair. Together with the likes of Boy George, he became part of the British New Romantic movement which emerged in the late 1970s club scene and was popularised in the early 1980s.

When his first hits emerged in 1983, the magazine Number One thought it was a nice idea to have a double interview with Marilyn and Kim Wilde. This week's Throwback Thursday photograph is taken from that session. You can read the article here. Marilyn recently released a new single 'Love or money', which you can see here. 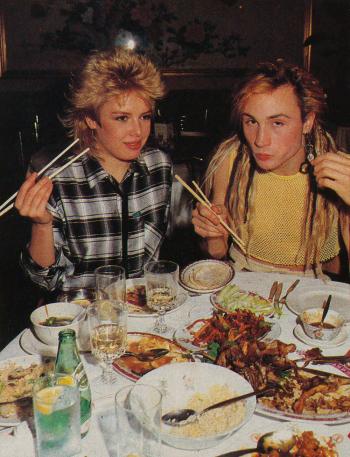