Sometimes we wonder what lies hidden in the drawers of longtime Kim Wilde fans. Live photographs from eons ago, perhaps? Well, sometimes a longtime fan comes up with exactly that. The photograph below was contributed to this website by Mette Mose Hansen, who made a few of them during Kim's performance at the Falconer Centre in Copenhagen (Denmark) exactly 33 years ago today.

The 'Catch' tour had started on November 26, 1983 at the Palais d'Hiver in Lyon (France) and ended on December 10, 1983 at the Nobelhallen in Karlskoga (Sweden). It was almost the last burst of activity by Kim that year, with only a TV performance for Thommy's Popshow in Germany to follow on December 17. 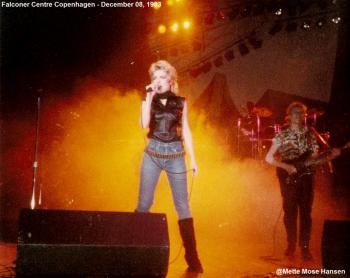