Looking back on the year 2016, what strikes most people is that the world has lost many great names. In sports, we lost Muhammad Ali and Johan Cruyff, in film and television, we lost Alan Thicke, Gene Wilder and Zsa Zsa Gabor, and in literature we lost Harper Lee and Umberto Eco. But the music world was probably shocked the most, with major deaths like David Bowie and Prince. The biggest loss for this website's editor was Black's Colin Vearncombe, who leaves behind a legacy of beautiful, if commercially criminally overlooked, songs (Kim actually covered his song 'Wonderful life' on her 2011 album 'Snapshots').

For Kim Wilde fans, the deaths of David Bowie, and Rod Temperton were remarkable, since Kim worked with both of them. And the death of Pete Burns was also remarkable because it happened just weeks after KIm started playing his band Dead or Alive's biggest hit 'You spin me 'round' live during a tour in the Netherlands. But it was all overshadowed by the sudden unexpected death of Steve Byrd, the man that played an important role in Kim's musical output between 1982 and 1994. You can read this website's stories about his tragic passing here, here and here. For the final Throwback Thursday of 2016, we pay tribute to Steve with this live pic from 1984. It is a lesser known picture of the two but it shows them during a performance before one of their biggest audience until then, at the Elixir Festival in France in the summer of 1984. 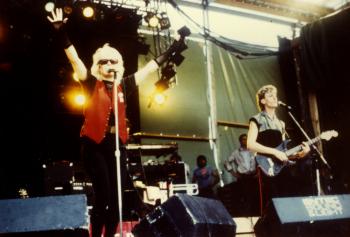