In this week's Throwback Thursday photograph, Kim is upstaged.... by her own house! The photograph was taken by Lawrence Lawry for an article that was published exactly 21 years ago today, in the June 1, 1996 issue of Hello! magazine in the UK. It was the first big photo report at Kim's home, and the biggest difference between then and now is the garden, which at the time was still very much an empty plot of land.

Back then, Kim was starring in the musical Tommy and already in a relationship with her co-star, Hal Fowler. She was reluctant to talk about that relationship, however: "I don't really want to discuss my relationship right now, except to say that I'm extraordinarily happy with my boyfriend. I'm scared to talk about those sort of things these days." Exactly three months later, the two got married. 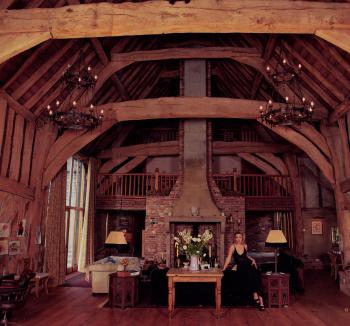