Ali Campbell, frontman of UB40, quit his band in January 2008, after his solo album 'Running free' was a top 10 hit in the UK. The band's final performance took place in February 2008 in Australia, New Zealand and Uganda. Having already formed a new band, Ali Campbell performed live at the Royal Albert Hall in London on April 3, 2008. The show featured lots of guest artists, including Kim Wilde.

The duo sang 'I got you babe', just like they'd done a year earlier at a special concert in Brussels (Belgium) to celebrate the 50th Birthday of the European Union. The concert was filmed and was eventually released on DVD. This week's Throwback Thursday photograph is actually a still from that DVD. 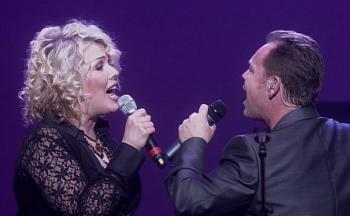