Peter Taylor (1948-2014) was a musician from Blackburn who formed the bands Take 5 and Weather in the late Sixties. With his band Weather, he recorded two singles in 1969. 'Look in my eyes' was released on January 17, 1969 and featured two tracks written by Marty Wilde and Ronnie Scott: 'Look in my eyes' and the B-side 'Running forwards (out of love)'. 'Jamboree special', released in November 1969, was written by Marty Wilde, with the B-side 'Two peculiar people' written by the band, consisting of Taylor, Eddlestone, Jordan and Hopwood. Both singles, and all four tracks, were produced by Marty Wilde. No other releases by Weather seem to exist.

After Weather folded, Peter Taylor almost joined Deep Purple, but when Dave Coverdale and Glen Hughes were recruited instead, he was offered the chance to form Copperfield and went on a six month tour in South Africa. He had a number 2 hit over there with a cover version of Hot Chocolate's 'So you win again'. Pete died from pneumonia on July 21, 2014 after picking up a chest infection. 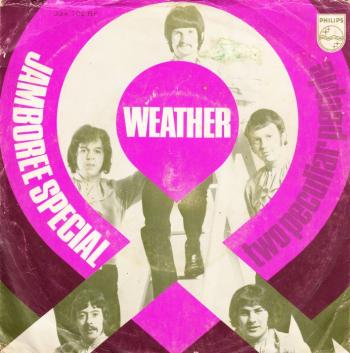