Kim Wilde has released many songs during her career. Some of them have been covered by other artists. On Cover Friday, Wilde Life presents cover versions of Kim Wilde songs. In this first installment: Nirvana.

This next week, it's 13 years since Kurt Cobain tragically committed suicide, leaving behind his daughter Francis Bean Cobain and his partner Courtney Love. Cobain, of course, was the lead singer of Nirvana, the band that shot to fame in 1991 with 'Smells like teen spirit' and their second album 'Nevermind' as part of the Seattle 'grunge' scene.

No need for introduction, then, in this week's installment of Cover Friday, although it may surprise you that the American band actually performed Kim Wilde's 'Kids in America' live at least once, at the Estádio Cícero Pompeu de Toledo in Sao Paulo, January 16, 1993. During this gig they also played covers of 'Seasons in the sun', 'Should I stay or should I go' and 'We will rock you'. You can listen to a recording of 'Kids in America' here. 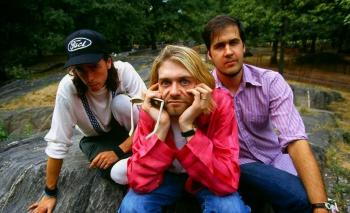