Kim Wilde's eighth studio album 'Love is' is 25 years old today. Released in 1992, the album featured the hit single 'Love is holy' and propelled Kim back into the limelight after the relative failure of the previous album 'Love moves'. Photographers Zanna and Mauro Carraro made sure that Kim looked her best, as evidenced in this week's pick for Throwback Thursday.

The photo sessions for the album yielded, amongst others, this photograph, which is one of Kim's own personal favourites, as she said in later years. It is indeed a beautiful - and rather sexy! - shot. 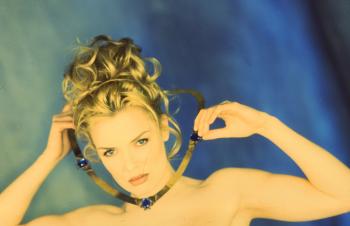