Today in 2011, Kim Wilde's music video for 'Sleeping Satellite' was released online. Filmed at the Kameha hotel ("Das Design Hotel") in Bonn (Germany), the video featured the same glitzy corridor that was used on the sleeve of the accompanying album 'Snapshots'.

This week's Throwback Thursday photograph is taken directly from that music video, because there are many frames within that video that could be used as a photograph in its own right. In a word: beautiful. 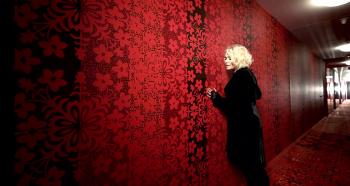