2007 was a busy year for Kim Wilde. She undertook the biggest solo tour of her career, supporting the 2006 album 'Never say never'. Entitled the 'Perfect Girl Tour', it consisted of two legs, one in February/March and one in November, taking her through Europe twice. During the summer, she did even more live gigs, appearing at festivals in Germany, Netherlands, Latvia and Denmark. The Meyer Werft festival was just one of them, taking place exactly 10 years ago today. It was a significant one, because it was the last festival date until the second leg of the Perfect Girl Tour took off seven weeks later.

This week's Throwback Thursday picture was taken during this performance, showing an intense Kim in the sun. 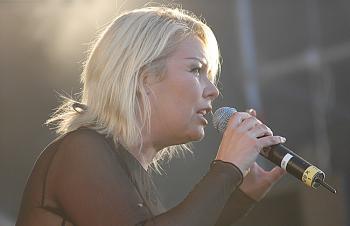