Kim's collaboration with Lawnmower Deth, 'F U Kristmas' was released earlier this month. It was not the first time that Kim worked with a funtastic metal band. Back in 1993, she appeared on Dutch broadcaster Veronica's Music Day, promoting her then-current single 'If I can't have you'. While in the studio, the American band Green Jelly appeared to perform their hit single 'Three little pigs'. And, sure enough, Kim was willing and able to handle one of the puppets that was part of their stage show.

This collaboration was rather a 'spur of the moment' thing, but a memorable TV moment for the fans that saw it. If you missed it, you can watch the clip here. 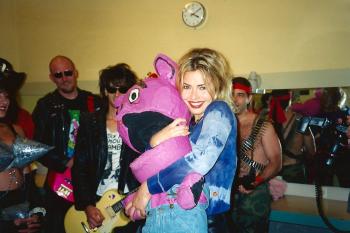