We don't need to go back too far in time for this week's throwback, because this picture was taken in November 2016, when Howard Jones and Kim Wilde were in Australia for their tour. During the tour, they were doing some promotional interviews and during one of those interviews, this photograph was made.

Why Howard Jones? Because he is celebrating his 62nd birthday today. His recent tour with Kim in Australia wasn't the only time they worked together: in 2003, they were both on the Here & Now Greatest Hits tour. 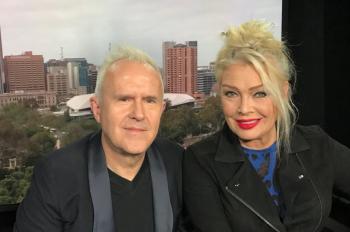