Proving that Marty Wilde's songs were also popular in Portugal, this week's choice is 'Eu Ainda Acredito No Amanha', a version of 'I still believe in tomorrow', originally recorded by John & Anne Ryder. Thanks to earlier instalments we know that the song was recorded in Northern Europe by the Hootenanny Singers and Danny, but this week's version adds some Southern passion to the track.

Os Caçulas was a vocal group formed in 1962 by Alvinho (Alvaro Damasceno), Vera Lúcia Carvalho, Yara Coelho (Yara Pereira Mattos) and Gilberto Santamaria. They  recorded a single in 1967. The following year they signed a contract with RCA Victor and recorded their self-titled debut album. That album included the song 'Eu Ainda Acredito No Amanha'.
In 1969, Gilberto left the group to devote himself to a solo career. He was replaced by Mario Marcos. After recording a second album, the group fell apart. 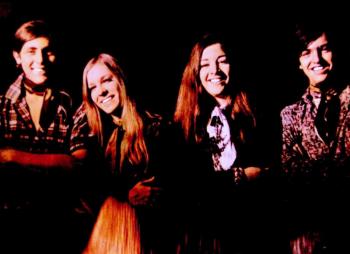