21 years ago today, on February 8, 1997, Kim Wilde appeared in the last performance of 'Tommy' at Shaftesbury Theatre in London's West End. It had been an incredible year for her, performing in the musical eight times a week, meeting her co-star Hal Fowler, falling in love, getting married and also promoting her work and the single 'Shame' in various TV programmes. After February 8, Kim continued to work on an album that was never released while also getting pregnant.

This week's photograph for Throwback Thursday was taken during one of many performances of 'Tommy'. Unfortunately none of them were ever recorded and released on video. 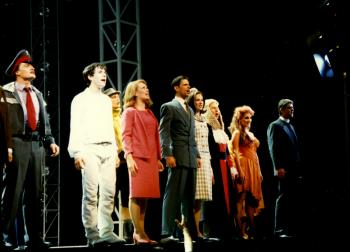