Kim Wilde has released many songs during her career. Some of them have been covered by other artists. On Cover Friday, Wilde Life presents cover versions of Kim Wilde songs. This week: Selma.

We have to be careful to post every Kim Wilde cover that is posted as a video on YouTube, because too many amateurs have taken their chance to make an instrumental version of one of her big hits, sitting down behind a piano or with a guitar, and just recording their own work - which sometimes doesn't come close to anything listenable.

But every once in a while, these home creations amount to something special. Take for instance this song, 'Hey Lieber Schneemann', a German version of Kim's seasonal song 'Hey Mister Snowman'. It was recorded by Jonas, who calls himself 'The Music Man' on YouTube. He specializes in acapella, unplugged or fully orchestrated cover versions of wellknown, and sometimes less wellknown, songs. You can also find him on recording-blog.com. For this cover version he employed his daughter Selma, a talented 12 year old girl. The German lyrics were contributed by Selma's proud grandpa Dirk Holterman. Happy Christmas! 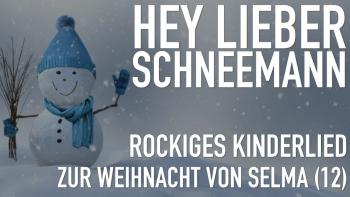