The greatest hits compilation 'Pop Don't Stop' was released on Friday, and it has met enthusiastic response from fans and press alike. Still, there are always some lingering questions. Most of the questions pertain to the collector's edition, but some of these are also appropriate for the 2CD version. Questions were brought together from social media, as well as e-mails to this website. We try to answer them all in this FAQ. Here goes!

How did the tracklisting come together?
Kim and her management proposed the tracks for the 2cd version of the album. Most probably, some or all of these tracks will appear during the Greatest Hits Tour, which is now scheduled for 2022. Alan Connor (who ran the project for Cherry Pop) and Marcel Rijs ('consultant' for the project) worked on a tracklisting for these tracks, featuring all the tracks from the MCA era on one disc and all the other tracks on the other disc. Putting them in random order was the logical thing to do, as this would scatter the biggest hits around and give the listener a better experience.
When Cherry Pop decided to compile a collector's edition, Marcel Rijs put together a tracklisting for the other three CD's. It seemed logical to get all the other singles, which were not included in the 2CD version, together for a third disc. A B-sides album has always seemed an attractive proposition, so these were quickly listed as well, and finally a disc of remixes, consisting primarily of Kim's biggest hits ('Kids in America', 'Cambodia', 'You Keep Me Hangin' On') and remixes that have never been issued on CD before ('You Came', 'Can't Get Enough (Of Your Love)', 'Breakin' Away', the three remixes from the 'Here Come the Aliens' album). The DVD's were the icing on the cake, so to speak! And obviously those would have to include all the music videos from 1981 until now.

Why were the single versions used on this release?
A major gripe about compilation albums put together by record companies is that they often use the album versions of songs, whereas the single versions are usually better known, having been played on the radio and bought by the general public. Also, fans usually have the albums (and thus the album versions), whereas the single versions tend to be more elusive. And finally, when you look at the tracklisting of the 2CD version and the length of these CD's, you will notice that they are both using the full capacity of the discs. (78+ minutes and 73+ minutes respectively). If you would put together the same tracklisting with the original album versions, they wouldn't fit onto these CD's!

Does the set really use all the single versions?
That's a 'yes' for all tracks. In some cases ('Kids in America', 'Four Letter Word', 'Love in the Natural Way' for instance) there was no single version, but in all other cases the single version was used. Almost all of them have been identified in the artwork, but there are a few that weren't identified as a single version - but they still were the single version. Cases in point are 'Time', 'Breakin' Away' and, on the collector's edition, 'World in Perfect Harmony'.

Why are a large number of singles still not included? 'Ego' and 'Take Me Tonight' were released in a few territories, so they should be here.
'Ego' was only ever released on a promotional 7" single, and 'Take Me Tonight' was released in Japan. You might say that this compilation is a bit UK- and Europe-centric, another answer could be that it is simply impossible to fit everything in.

Why was 'Anyplace Anywhere Anytime' (the duet with Nena) not included?
The easiest answer is that this track was really a Nena song, and Kim was "only a guest" on this track. Still, it was a big hit in Europe, and it would have been great to include in this set. However, it would have to be licensed, and since there were already a lot of licensing issues for this compilation, this one track was not added to the workload.

Why was 'Rockin' Around The Christmas Tree' (the duet with Mel Smith) not included?
Part of the answer comes from the above: yet another record company and more licensing to add into the mix. But also, this is a Christmas track, and would only have fitted on the third disc of the box set, where the 'remaining singles' were brought together.

Will there be a vinyl release?
There are some plans for this, but watch this space...

Will there be signed copies for sale?
There are no plans for this right now.

Why are 'Songs About Love', 'All About Me' and the 'Sanjazz Megamix' missing from the B-sides disc?
You may have noticed that the B-sides discs runs at almost 80 minutes, the maximum capacity for a CD. Whatever we chose, this disc would not have been complete. 'Songs About Love' was released on the 2010 reissue of Another Step. 'All About Me' was actually considered for this release, but it wasn't possible to get this track approved for licensing in time. Instead, two of the 'early' B-sides were included on the disc. Finally, the 'Sanjazz Megamix' was never considered for this disc, because it had to consist of B-sides, not remixes.

Why is the great song 'Words Fell Down' missing in the greatest hits compilation?
That's an easy one to answer: it was never a single. Also, it was released in last year's deluxe edition of Select, so it is still available.

Are the DVD's in NTSC or PAL?
That's an interesting one: when you look at the back of the box set, it says 'PAL' on the back. But the discs themselves have got the NTSC stamp, and the DVD's are actually in NTSC (region-free). The PAL statement got there by mistake when the FSK-label was added to the artwork. 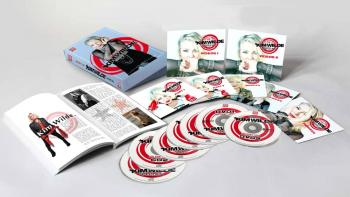