If you were to write a letter to your 16-year-old self, what would it say?

In Dear Me, some of the world's best loved personalities have written just such a letter. Dear Me includes letters from three knights, a handful of Oscar winners, a bevy of Baftas, an intrepid explorer, a few teenage pop stars, an avid horticulturalist, pages and pages of bestselling authors, a dishy doctor, a full credit of film directors, a lovey of top actors, a giggle of comedians and an Archbishop! The letters range from the compassionate to the shocking via hilarity and heartbreak, but they all have one thing in common: they offer a unique insight into the teenager who would grow up to be.... Stephen Fry, Annie Lennox, Paul O'Grady, Jackie Collins, Fay Weldon, Alan Carr, Peter Kay, Debbie Harry, Brenda Blethyn , Jonathan Ross, Liz Smith, Will Young, Alison Moyet, Rosanne Cash, Sir Ranulph Fiennes, Yoko Ono, Emma Thompson, Kim Wilde… to name but a few. 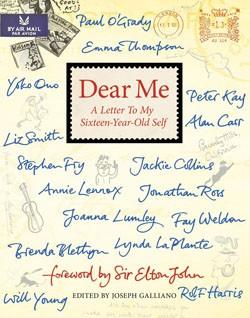