Short for Acquired Immune Deficiency Syndrome, disease that renders the body's immune system unable to resist invasion by several microorganisms that cause serious infections. It is usually characterized by severe weight loss and fatigue, and frequently by neurological complications due to damage of cells of the brain.

AIDS is transmitted by blood, through intimate sexual contact, from infected mothers to their babies in the uterus, and perhaps through infected mother's milk. The virus usually remains dormant for some time in infected cells, and it may take up to 10 years for symptoms to develop.
Several strains of the AIDS virus have been isolated, and it appears to be continually changing in genetic makeup and, thus, its envelope, against which a person's immune system can make antibodies. This makes development of a vaccine that is able to raise protective antibodies to all virus strains a very difficult task. Nevertheless, dramatic progress has been made in a very short time in identifying the molecular makeup of the AIDS virus, its modes of transmission, and the mechanisms by which it produces disease.

Much research centers on solving the problems of treating people who already have AIDS and those who have been infected with the virus but have not yet developed the syndrome. In 1990, the World Health Organization announced that 203,599 cases of AIDS were reported worldwide by the end of 1989, and estimated the actual number of cases to be 600,000.

Kim has done several charity appearances in order to raise money for research on AIDS. One of the most notable appearances was at the charity concert 'Action for AIDS' on April 1, 1987 at Wembley in London, during which she sang Sorry Seems to be the Hardest Word together with Marty, with Ricky on keyboards.

How do you think we can continue educating people without them getting bored with the subject?
Kim: I think that is going to be the problem. You know, people getting bored of hearing about AIDS, people getting so frightened about it that they wanna close their ears. And I think you just have to keep shouting about it all the time.
Do you know people who've had the problem?
Yes.
How has that affected you?
Very badly.
In what way?
Well - it's kindof... a bit personal really.

Stand by me: benefit concert video 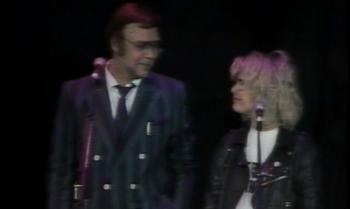