All the Things She Said

Song written by Sergio Galoyan, Trevor Horn, Martin Kierszenbaum, Elena Kiper, Valeriy Polienko and John-Paul Mason and originally recorded by the Russian duo t.A.T.u. The song was released as the duo's lead single for their 2002 album '200 km/h in the wrong lane'. It was the English-language version of their 2000 single 'Ya soshla s uma', which was a big hit in Russia. Lyrically, the song discusses difficulty in teenagers allowing to express their sexuality. Based on both the English and Russian versions, the song was conceived when Kiper had a dentist appointment. She fell asleep while having surgery and dreamed about kissing another woman. She woke up saying "Ya soshla s uma", which means "I've lost my mind!" After discussing this with Shapovalov, he started to write the second phrase "I need her." Shapovalov decided to carry on the concept of lesbianism through the English version.

There was a high demand for imports of the single in the UK, causing it to debut at number 57 on the UK Singles Chart. It rose to number forty-four and ascended to the top of the charts the following week. The song spent four weeks at one on the UK Singles Chart. It stayed in the charts for fifteen weeks and was certified Silver by the British Phonographic Industry, selling more than 300,000 copies. Subsequently, the single became a top 5 hit almost in every country where it was released.

Kim Wilde performed the song live, sharing vocal duties with Scarlett Wilde, on November 9, 2017 in Oostende (Belgium) and November 10, 2017 in Zwolle (Netherlands). On subsequent dates the song was dropped from the setlist in favour of a cover of Fleetwood Mac's Big Love. 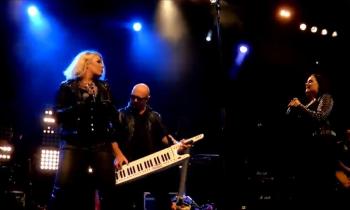 I'm in serious shit, I feel totally lost
If I'm asking for help it's only because
Being with you has opened my eyes
Could I ever believe such a perfect surprise?

And I'm all mixed up, feeling cornered and rushed
They say it's my fault but I want her so much
Want to fly her away where the sun and rain
Come in over my face, wash away all the shame
When they stop and stare - don't worry me
'Cause I'm feeling for her what she's feeling for me
I can try to pretend, I can try to forget
But it's driving me mad, going out of my head

Mom they're looking at me
Tell me what do you see?
Yes, I've lost my mind

Dad they're looking at me
Will I ever be free?
Have I crossed the line?