Formed in 1979, this Glasgow band consisted of 17 year old Clare Grogan, Johnny McElhone (Born 21 April 1963; bass), Tony McDaid (guitar), and Michael "Tich" Anderson (drums). In 1980 Altered Images toured with Siouxsie And The Banshees. The influential DJ John Peel picked up on their work and was one factor in getting a recording contract from Epic Records. Their debut single 'Dead pop stars' did not make any chart impact, just like the follow-up, 'A day's wait' (both 1981).
The group completed their debut album, 'Happy Birthday' in the same year. The title track, produced by Martin Rushent, was a surprise success, peaking at no. 2. Almost equally big hits were "I could be happy" and "See those eyes" (1982). The second album, 'Pinky blue' was less successful.
1983's album "Bite" led to a more sophisticated sound, and yielded another top 10 hit, 'Don't talk to me about love'.

Following a brief tour with the addition of David Wilde and Jim Prime, the group disbanded. Clare pursued an acting career, whereas guitarist Johnny McElhone moved on to Hipsway and Texas.

In 2002, Clare joined Kim and others during the Here and Now Christmas Party tour. A year later, an Altered Images compilation album called 'Destiny - the hits' was released, featuring two new tracks recorded by Clare Grogan. 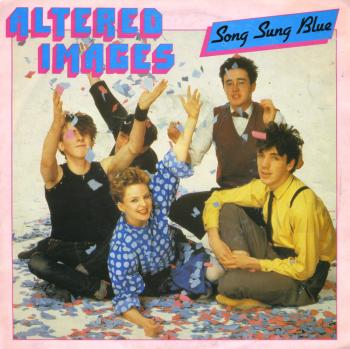